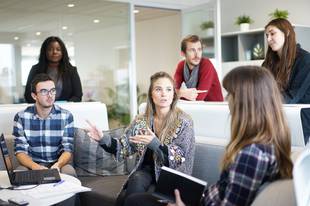 The Theory of comparative advantage suggests that dissimilarities amoung countries would lead to a more trade among them. For example, capital-intensive producers exchaning products with labor intensive producers. In fact, most world trade occurs among similar countries (for example, industrialized nations with highly educated population located in temperate zones). The theory of acquired advantage helps explain this phenomenon: specially, having developed a product in response to observe needs in its domestic market, a producer will turn to foreign markets perceived to be most similar to these with each other tend to be similar in terms of economic, political and technological sophistication, they differ in how they specialized to gain acquired advantage. As example, the British have an advantage in biochemistry, the French have one in pharmacology, and the Germans have one in synthetics, all acquired through technology rather than natural resources.

One reason why companies and/or countries frequently gain from trade in foreign markets has to do with the theory of comparative advantage, meaning that they exchange goods and services in which they have a relative advantage (for example, better resources, specialization, mechanization, and climate) for those in which they are at a relative disadvantage. For example, some foregin producers have a comparative advantage vis-a-vis U.S firms in producing footwear, which involves labor intensive processes that favor low-wage countries. The United States, on the other hand, has a comparative advantage in the production of goods that have a high ratio of capital to labor, such as jet airlines, healthcare services, communication satellites, and power generation equipment. The availability of inexpensive imports (for example, shoes and clothing), the theory states, enhances living standards of U.S. citizens and shifts capital and labor used in these labor intensive industries to produce products (for example, cars, computers, housing) they are good at producing.

Since there are more people with greater total purchasing power in the world as a whole than in a single domestic market, companies can increase sales by successfully penetrating international markets. More often, these markets are more receptive to the product than the domestic market. For example, during downturns in the domestic business cycle, foreign markets are often unaffected because of time lags. They offer excellent outlets for excess inventories and opportunities to utilize productive capacity fully.

A company that successfully enters foreign markets poses two competitive threats to companies left behind: (1) these stay-at-homes will lose market share to leverage benefits generated by the company's international marketing activities, and (2) these stay-at-homes will lose a future opportunity to enter and grow in foreign markets now occupied by the early-birds competitors.

For example, in spite of its recognized technological expertise, the United States has become non competitive in its own domestic market against Pacific Rim Countries that got a head start in marketing video recorders, television sets, and other consumer electronics products in global markets.

Many countries attract companies by offering incentives in the form of reduced property, import, and income taxes for an initial time period. Multinational companies may also adjust revenue reports, or operations, so the largest profits are recorded in countries with low tax rates. For example, we have the Export Processing Zones and Industrial Parks that are giving tax incentives to multinational companies.

Exporting provides a second life to products and services that are no longer competitive in home markets. Good example, Mainland China represents a booming market for vintage U.S "B" motion pictures and musics.

Through leverage, tax, and competitive advantages, the overseas strategies of multinational companies can produce profits well in excess of domestic markets. For example, American automobile firms suffered huge profit losses in the domestic market in 2008l their European operations remained considerably profitable. In 1999, Coca-cola's Japanese market alone, accounted for 20 percent of the company's profits, about $1 billion, just 5 percent of its overall sales volume. Other large firms whose profits from overseas markets exceed those of domestic markets include Michelin form France, Sony from Japan, Philips from Netherlands, BASF from Germany, and Kia from South Korea.

Lukewarm attitudes by host country governments toward foreign firms that can stifle successful entry include confiscatory taxes and tariffs, quotas that limit the amount of imports accepted, and "local content" regulations requiring use of host country products, personnel funds, and facilities.

Measures of economic viability, such as the population's standard of living and the nation's stage of economic development and currency stability, are often insufficient to justify the expense and risk of attempting to enter an international market. Unfriendly demographic environments might include a lack of people age, income, or occupational groups likely to buy the company's products.

Personal beliefs, aspirations, languages, interpersonal relationships, and social structure differ among nations and can adversely affect not only the way a product offering is perceived and received, but also the cost and risk associated with overcoming these negatives.

Underdeveloped infrastructures to facilitate transportation and communication systems can make it prohibitively expensive to market product offerings in foreign nations.

Most companies that multinational or global status find it considerably more difficult to coordinate and control manufacturing and marketing activities and monitor competitors in dispersed markets, with different customs, languages, transportation, and communication media.

Approaches To Pricing Decisions For Business

Pricing should be seen from the point of view of ...

Pricing Strategies And Tactics You Need To Know For Business

Is stock talk leaving you crazily clueless? This quickie primer ...