How To Achieve Pearly White Teeth 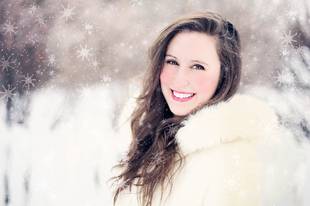 The next time you're feeling frustrated by the indignites of a bleaching try-drool, how sexy!-consider this: Ancient Romans imported urine from Portugal to whiten their teeth. A few millennia later, we'll still do (pretty much) anything for a beautiful smile. In a recent survey by the American Academy of Cosmetic Dentistry, women said they were twice as likely to spend money on improving the appearance of their teeth than making their wrinkles disappear. From a flossing gizmo that trades string for a blast of vapor to $100 shots of Botox that can reshape your smile, there are innovative new ways to brighten up-none of which involve doing as the Romans did.

Even dentist who make their living brightening smiles recommend the at-home whiteners you can buy at the drugstore. Here, the tricks to making the most of DIY bleaching kits.

Get a kit with 7 percent hydrogen peroxide (or 22 percent carbamide peroxide) that you leave on your teeth for at least 15 minutes. Strips like Crest 3D White Intensive Professional Effects Whitestrips and trays like Aqua Fresh White Teeth Whitening System work much better than pens. (The bleach from pens is washed away by saliva.)

Have your teeth cleaned before you bleach you want to whiten the enamel, not the plaque. You should brush before using strips or trays, and rinse really well, since the fluoride in toothpaste can prevent teeth from absorbing the bleach.

Maintain your new smile by rinsing your mouth with water after meals and with a whitening mouthwash (such as Colgate Optic White Mouthwash) twice a day. Mouthwashes work better than whitening toothpastes for this purpose, according to one recent study.

Not everyone can whiten at home: If you've got gray teeth, fake teeth, sensitive teeth, or "my wedding is tomorrow" teeth, make an appointment with a dentist.

"If you have to take the ice out of drinks, you shouldn't do bleaching at home," says Jeff Golub-Evans, a New York City cosmetic dentist. Sensitivity to cold means you'll probably be even more sensitive-if not in real pain-after bleaching. A dentist or technician can apply a protective coat of wax to sensitive areas-fillings, receding gums, and teeth that have been ground down- so patients experience less pain.

Whitening at home isn't an option if you have an event to go to, like, tonight. But thanks to prescription-strength peroxide (35 to 40 percent), a dentist can whiten teeth in 45 minutes, says Golub-Evans.

Veneers and ceramic replacements aren't affected by bleach, and bonded teeth can only be restored to their original color. But all of them can be polished to appear brighter, says Jeffrey M. Cole, a former president of the Academy of General Dentistry. The same goes for gray teeth- whiteners won't work.

Whitening toothpastes restore some of a smile's innocence: With polishing agents like silica (Rembrandt Intense Stain Toothpaste) or baking soda (Arm & Hammer Advanced White Toothpaste With Stain Defense), they scrub stains from wine, coffee, and tea. (Some have bleaching gel, but unless you brush for 20 minutes, you will rinse it out before it goes to work.) Layliev suggests waiting 30 minutes after a meal before brushing with a whitening paste, since chewing food leads to higher acidity in the mouth. "That environment, combined with the polishers in whitening toothpastes, can mean a lot of erosion," he says. If you're adamant about getting a snowier, not just shinier, smile from a tube, try an optical whitening toothpaste, such as Luster Now Instant Whitening Toothpaste. Instead of scrubbing the surface of the teeth, the toothpaste deposits microscopic blue particles and polymers that give the illusion of whiteness.

The reason whitening can leave your mouth feeling beset by mini lightning bolts is that teeth are riddled with tiny channels that run from the surface to the nerves below. When you bleach, the acidity of the gel forces minerals out of the channels and puts pressure on the nerves. But the discomfort is temporary. Once the pH in the mouth returns to normal (usually within a day), minerals reenter the channels and the problem disappears. Fleeting or nor, though, the pain can be avoided:

1. Water protection. A toothpaste with potassium nitrate, like Sensodyne Full Protection, shores up the minerals in teeth and decreases pressure on the nerves, says Cole. Golub-Evans recommends brushing with one for at least two weeks before whitening and before and after each treatment.

2. Take your time. We understand-you want a blinding smile now. But skipping a day of whitening when your teeth are aching won't impede your progress. "You'll have the same result-doing it faster doesn't make teeth whiter," says Cole. People with sensitive teeth shouldn't use at-home treatments that promise results in fewer than ten days.

4. Obvious but effective. If you experience steady, allover throbbing, take two ibuprofen 30 minutes before your next whitening session (but not Tylenol, since acetaminophen isn't as effective, says Golub-Evans).

10 Unaware Things We Do That Damage Our Teeth

We are notoriously known for our ‘bad’ teeth, however I ...

The Benefits Of Eating Banana

If you think that bananas are just for monkeys, after ...

If you are reading this article maybe you are already ...

What Does Toothpaste Really Do To Protect Our Teeth

You have seen commercials telling us that toothpaste protects our ...