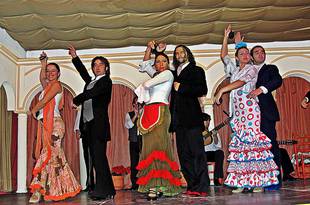 Dance as an art is one of the durable strands interwoven into our life as a people to form the fabric of culture. Dance has existed since man came into being. It is through dance movements that people can communicate for it has been a strong factor in the expression of one's soul and identity of character. It is also through dance that people can express their joys and sorrows as well as their ideals and aspirations in life.

Dancing was considered a religious activity among the early Filipinos. Dances were performed by the priests and priestesses in thanksgiving for a plentiful harvest, a victorious battle, a prosperous voyage or recovery from sickness.

During the Spanish regime, dancing played an important part in the social activity of the people. Among the Christianized Filipino groups, the kumintangwas the oldest dance and song. It was pantomimed song and dance. The Pampangois another dance, characterized by the movements of the lion and clapping of the hands. These dances were set aside with the coming of the Spaniards, but were later revived as new dances such as the fandango, lanceros, rigodon, carinosaand curachawere introduced by the Spaniards. The folk dances of today were adaptations of the old native dances.

The dances below were also some of the folk dances with Spanish influence not only with their movements and with the dance steps, but also with the costumes and music used in every dance.

How Does Glue Hold Things Together

When glue is warmed, it changes its form gradually from ...

How To Wear Flats (And Not Look Frumpy)

Flats are having a big moment right now, and they ...

"Everyone throws something cheap in the mix and that's just ...