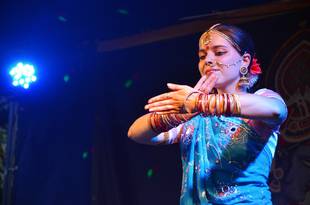 The origins of Indian civilization go back to about 3000 B.C. This period coincides with the ancient river civilization of Mesopotamia in the Tigris-Euphrates Valley.

About 3000 B.C there was a flourishing civilation in the Indus Valley with two important centers, Mohenjo-Daro and Harappa, two cities in Northwestern India. They were busting commercial cities with broad streets lined with multi-storied houses which had brick foundations and wooden superstructures. Very little of their architecture and sculpture have survived.

Among the few evidences of this early civilization are bronze and copper statuettes and steatite seals. The sculpture of a nude torso found at Harappa emphasizes sensous surface rather than logical structure. The statuette of a dancing girl from Mohenjo-Daro shows vigor and the same concern for surface texture that has always characterized Indian art.

The music, art and architecture of India are perhaps better known than any other forms of Oriental culture. The classical guitar playing of Ravi Shankar, a modern Indian musician, has greatly influenced the modern rock of popular music starting with the Beatles in the 1960's. Indian art is both symbolic and sacred. Since they also portray the epic loves of their gods, Indian religious art may also be the earliest examples of pornography. In the realm of architecture, India gave the world such architectural wonders as the Taj Mahal in Agra, the Mogul palaces in New Delhi, and the temple of Kailasha in Hyderabad. Indian handicrafts in cloth, wood, metals, leather, and jewelry are very much in demand all over the world.

Indian dance is a complex language in itself. It depends much on highly exaggerated facial expressions and on an extensive vocabulary of hand gestures called mudras, Many dances require an intricate painting of the face in many hues, elaborate costumes and jewelry, including anklets to further enrich the dance rhythms. Kathakali, an important dance, is of a virile character. Its actions, spectacular and exaggerated, include high leaps, jumps, and plunges.

The dancers never speak, except for an occasional shrill cry, and the musicians who stand at the back beating gongs and cymbals sing the poetic stanzas into the ears of the performers describing their actions and exhorting them to greater and more gigantic tasks. Throughout the entire performance, a dancer's hands are active. There are specific finger positions and hand movements not only for nouns and adjectives, but special formations which by convention stand for adverbs, conjunctions, and declensions as well. Any competent Kathakalidancer knows about five hundred mudras and can, if you improvise a sentence on the spur of the moment, put instantly, even while you talk, into this sign language of the dance.

How To Buy A Problem-Free Dreamhouse

Whether its an old villa, a new townhouse or an ...