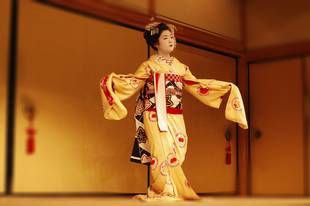 The two mainforms of Japanese theater are the Noh and the Kabuki. A secondary form is the Bunraku or puppet show.

The Noh drama, compared by scholars to the Greek tragedies, evolved in the 14th century. It was essentially an aristocratic cut for nobles with a broad cultural background. The Noh was, first of all, illusion referring to local legends and historical feats. Its acting was mimetic, as it consisted of highly stylized posture and dance. The words were spoken, half-sung, or chanted to a conventional accompaniment of rhythm, movement, and color. A symbolic theater, it used vivid striking masks for spirits, gods and young men. All the elements of movement, music, costume, and dance united to create a drama of intense concentration.

Ernest Fenollosa believes that the most striking thing about the Noh play is the marvelously complete grasp of spiritual being. Bodhisattvas, devas, elemental, animal spirits, hungry spirits or pests, cunning or malicious or angry devils, dragon kings from the water world, spirits of the moonlight, the souls of flowers and trees, essences that live in wine and fire, the semi-embodiments of a thought-all-these come and move before us in the dramatic types. (Ezra Pound and Ernest Fenollosa. The Classic Noh and Theater of Japan)

Kabuki as an art started later in Kyoto in the early 17th century with the rise of the merchant middle class. At first the actors, all male, performed their own compositions; later, outstanding writers, notably Chikamatsu Monzaemon, extended the repertoire of Kabuki plays to about 300 pieces. These plays include historical subjects, involving war and court intrigues, domestic subjects such as love and family problems, and dance-dramas in which the real and the supernatural intermingle. They bear such titles as "The Almanac of Love" or "Love-Suicide in the Women's Temple." The Kabuki heroes were not war heroes but merchants, petty samurai or warriors, and prostitutes.

A synthesis of all the arts, Kabuki play runs from morning to night; thus many viewers choose to attend only the high points of the drama.

Bunraku refers to the centuries-old tradition of Japanese puppet plays. As old as the Kabuki, the Bunraku often adapts styles and plays from the Kabuki repertoire. The subject matter of these puppet plays covers a wide range, including historical subjects dealing with great warriors, court lords, and ladies, as well as the middle class of merchants, shopkeepers, and the ordinary man in the street.

The puppets, one-third of a man in size, sometimes nearly life-size, require complex manipulation with three men operating one puppet. Dressed in exquisite costumes, the puppets are elaborate constructions with mechanical provisions for raising the eyebrows, rolling the eyeballs, opening and closing the mouth, moving the fingers to flirt with a fan, and so on. Thus puppetry becomes a highly expressive art.

Unlike in Western puppet shows where unseen hands operate the dolls usually by strings, the puppeteers in Bunraku can be seen onstage operating them. They make a strange sight behind the puppets with faces covered by a black cloth. Only great masters may work with faces uncovered.

How To Arrange Your Bathroom

Bathrooms are too often generic spaces that don't reflect your ...

How To Save Wetted Books

The most important thing to do to save your wetted ...