How To Hold Off Email Spams 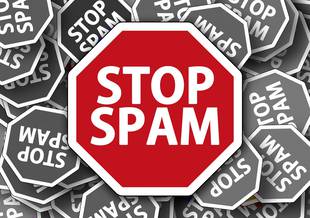 Spam is an unsolicited message indiscriminately sent in bulk through electronic medium like the Internet. While the most widely recognized form of spam is email spam, the term is applied to similar abuses in other media: instant messaging spam, Usenet newsgroup spam, Web search engine spam, spam in blogs, mobile phone messaging spam, Internet forum spam and junk fax transmissions.

There is no universally accepted origin of this term. While it is widely believed that it came from a luncheon meat name (taken from a cafe, the Monty Python, where nearly every item on the menu includes Spam luncheon meat), many other etymologies are also accepted.

Commercial spamming started in force on March 5, 1994, when a pair of lawyers, Laurence Canter and Martha Siegel, began using bulk Usenet posting to advertise immigration law services. The incident was commonly termed the "Green Card spam," after the subject line of the postings. The two went on to widely promote spamming of both Usenet and email as a new means of advertisement - over the objections of Internet users they labeled "anti-commerce radicals". Within a few years, the focus of spamming (and antispam efforts) moved chiefly to email, where it remains today.

Several acronyms were proposed to mean SPAM including "Shit Posing As Mail" and "Stupid Pointless Annoying Messages" or SPAMM, with the added M, to distinguish it from the luncheon meat?

In 1998, the New Oxford Dictionary, which had previously only defined "Spam" in relation to the trademarked food product, added a second definition to its entry: "Irrelevant or inappropriate messages sent on the Internet to a large number of newsgroups or users."

Many users are bothered by spam because it impinges upon the amount of time they spend reading their email. Many also find the content of spam frequently offensive, in that pornography and casino gambling are two of the most frequently advertised products. Spammers send their spam indiscriminately, so pornographic ads may show up in a work place or a child's email inbox, the latter of which is illegal in many jurisdictions. Recently, there has been a noticeable increase in spam advertising websites that contain child pornography.

Spam can also be used to spread computer viruses, trojan horses or other malicious software. The objective may be identity theft, or worse (e.g. advance fee fraud). Some spam attempts to capitalize on human greed whilst other attempts to use the victim's inexperience with computer technology to trick them (e.g. Phising).

On May 31, 2007, one of the world's most prolific spammers, 27-year-old Robert Alan Soloway, was arrested by federal authorities. Described as one of the top 10 spammers in the world, Soloway is charged with 35-counts, including mail fraud, wire fraud, email fraud, aggravated identity theft and money laundering. Prosecutors alleged that Soloway used millions of "zombie" computers to distribute millions of spam emails in 2003. The computers are called "zombies" because their owners are not aware that they are being used for malicious activity. This is the first case in which federal prosecutors used identity theft laws to prosecute a spammer for taking over someone else's Internet domain name.

Here are some general guidelines to hold off email spams:

How To Surf Safely On The Internet

It happens quite too fast. An intriguing e-mail message with ...

Choosing A CMS: Drupal Or Wordpress?

Whether you are a developer, artist or an entrepreneur that is looking ...

How To Shop Online Hassle-Free

Personal computers have become standard appliances in many homes today ...

How To Deal With Modem Problems

You are scheduled to chat with a very important person; ...