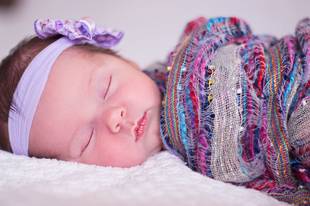 Babyhood is one of the two periods of rapid growth during the life span; the other comes at puberty. During the first six months of life, growth continues at the rapid rate characteristic of the prenatal period and then begins to slow down. In the second year, the rate of growth decelerates rapidly. During the first year of life, the increase in weight is proportionally greater than the increase in height; during the second year, the reverse is true.

If the rapid growth characteristic of the prenatal and early postnatal periods did not decelerate soon after birth, the child would grow into a giant. It has been estimated that if weight increased at the same rate it did during the first year of life, a child who weighed seven pounds at birth would weigh 230,029 pounds at eleven years of age.

While the general pattern of growth and development is similar for all babies, there are variations in height, weight, sensory capacities, and other areas of physical development. Some babies start life smaller and less well developed than the norm. This may be due to prematurity or to a poor physical condition resulting from maternal malnutrition, stress or some other unfavourable condition during the prenatal period. As a result, such babies tend to fall behind their age-mates during the babyhood years.

The pattern of physical growth in babyhood is much the same for boys and girls. However, within the sex groups there are marked variations. Throughout the first year of life, there is little difference in height and weight between black and white babies of comparable economic levels. Differences begin to appear in the second year, however, because black children are, typically, of a more slender build than white children.

At the age of four months, the baby’s weight has normally doubled. At one year, babies weigh, on the average, three times as much as they did at birth, or approximately 21 pounds. At the age of two, the typical American baby weighs 25 pounds. Increase in weight during babyhood comes mainly from an increase in fat issue.

Head growth slows down in babyhood, while trunk and limb growth increases. Thus the baby gradually becomes less top-heavy and appears more slender and less chunky by the end of babyhood.

Muscle fibers are present at birth but in very undeveloped forms. They grow slowly during babyhood and are weak. By contrast, fat issue develops rapidly during babyhood, due partly to the high fat content of milk, the main ingredient in a baby’s diet.

The average baby has four to six of the twenty temporary teeth by the age of one and sixteen by the age of two. The first teeth to cut through are those in the front, the last to appear are the molars. The last four of the temporary teeth usually erupt during the first year of early childhood.

At birth, brain weight is one-eighth of the baby’s total weight. Gain in brain weight is greatest during the first two years of life, thus accounting for the baby’s top-heavy appearance. The cerebellum, which plays an important role in body balance and postural control, triples in weight during the first year of postnatal life. This is true also for the cerebrum. Immature cells, present at birth, continue to develop after birth but relatively few new cells are formed.

By the age of three months, the eye muscles are well-enough coordinated to enable babies to see things clearly and distinctly and the cones are well-enough developed to enable them to see colors. Hearing develops rapidly during this time. Smell and taste, which are well developed at birth, continue to improve during babyhood. Babies are highly responsive to all skin stimuli because all sense organs relating to touch, pressure, pain, and temperature are present in well-developed forms.

How To Give Children The Right Nutrition

Most preschoolers do not usually eat too much at any ...

How To Protect Your Children During Summer

In the Philippines, summer time is vacation time for kids. ...

How To Keep Your Bathroom Child-Safe

When you have a hyperactive toddler of two to five ...