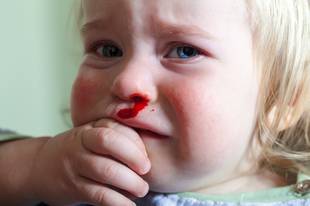 When an injury results in bleeding (hemmorrhage), steps must be taken to stop the loss of blood. If substantial amount of blood is lost, shock, unconsciousness and death can be a result.

Most bleeding injuries are not life-threatening, although appropriate care must be taken not only to stop the bleeding, but also to avoid infection and other complications.

Bleeding from the surface of your body can range from minor - the prick of a sewing needle can produce a droplet of blood - to major, as with a deep gash in which an artery is severed and blood gushes forth in rhythmic spurts. All wounds, however, require appropriate care and treatment; inadequate care can result in serious infection.

Internal bleeding, especially in the abdomen, head or chest, is extremely serious and can be life-threatening. Blood loss can be considerable - even if there is no evident external bleeding.

If the person has sustained a traumatic injury, an injury sustained during a fall, automobile accident, or event involving an external force or violence, suspect internal bleeding.

Detecting Internal Bleeding
In the event of a traumatic injury, such as might be experienced in an automobile crash or a fall, internal bleeding may not be immediately apparent. However, because of the dangers of internal bleeding, consider its possibility if you observe any of the following signs:

Internal bleeding may produce shock. The volume of blood in the body becomes inadequate and the person may feel weak, thirsty, and anxious. His or her skin may feel cool. Other symptoms of shock that may indicate the presence of internal bleeding include shallow and rapid breathing, a rapid and weak pulse, trembling, and restlessnes. The person may faint and lose consciousness when standing or seated but recovers when allowed to lie down. Elevating the legs may be of additional help.

To stop a serious bleeding injury, follow these steps:

1. Lay the affected person down. If possible, the person's head should be slightly lower than the trunk or the legs should be elevated. This position reduces the chances of fainting by increasing blood flow to the brain. If possible, elevate the site of bleeding; for example, an injured hand may be held up, over the level of the heart, in order to reduce blood flow.

2. Remove any obvious debris or dirt from the wound. Do not remove any objects impaled in the person. Do not probe the wound or attempt to clean it at this point. Your principal concern is to stop the loss of blood.

3. Put pressure directly on the wound with a sterile bandage, clean cloth, or even a piece of clothing. If nothing else is available, use your hand.

4. Maintain pressure until the bleeding stops. When it does, bind the wound dressing tightly with adhesive tape. If none is available, use a piece of clean clothing.

5. If the bleeding continues and seeps through the gauze or other material you are holding on the wound, do not remove it. Rather add more absorbent material on top of it.

6. If the bleeding does not stop with direct pressure, you may need to apply pressure to the major artery that delivers blood to the area of the wound. In the case of a wound on the hand or lower arm, for example, squeeze the main artery in the upper arm against the bone. Keep your fingers flat; with the other hand, continue to exert pressure on the wound itself.

How To Avoid Kidney Stones

Scientists really don't know why kidney stones form in some ...