GARLIC As A Medicine? How Effective It Is 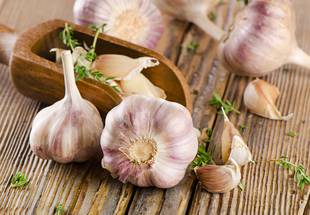 The ancient Egyptians revered it, Greek Olympians chewed it before competing, and the Chinese listed it as a cure for dozens of ailments. For centuries there has been a mystical folklore about garlic (scientifically known as Allium sativum) and its magical healing ability. On blind faith, many used it to cure colds, flu and a whole shopping list of ailments. People knew garlic made them feel better, but they didn't always understand how.

Today scientists have discovered not only how certain microbial and cancer-fighting chemicals from garlic work but why they work the way they do. With years of serious research behind them, these researchers are now convinced that garlic has been highly effective in reducing the two leading causes of death, cancer and heart disease and extending life itself.

One of the leading authorities on garlic research, Dr. Robert I. Lin, chairman of the First World Congress of the Health Significance of Garlic and Garlic Constituents, suggests that a daily dose of cooked garlic or garlic extract along with good eating habits and a good lifestyle "can substantially reduce the risks of cancer and cardiovascular disease in society."

Dr. Lin discovered that when garlic is cooked, processed, or metabolized, it releases a compound called thiol or thiol reagents that may modulate the body's defense against cancerous cells. He also proved that these substances could protect the body against the harmful effect of radiation therapy and protect the liver against environmental pollution.

"Garlic is the best candidate as a cancer-fighting substance," says National Cancer Institute (NCI) scientist, Dr. Herbert Pierson. He pointed out that research in both China and Italy show a large reduction in stomach cancer by people who ate various forms of garlic on a daily basis.

Even more interesting is the fact that garlic not only prevents tumor growth, but also stimulates immune cells, according to Dr. Benjamin Lau, physician and author of the book, Garlic for Health. "Garlic apparently stimulates the body's immune system, particularly enhancing the macrophages and lymphocytes, which destroy cancer cells."

Garlic, a member of the onion family, has been used medicinally throughout history. It was enlisted as a curative alternative during Europe's "Black Plague" in the 1300s and was used to treat typhus and dysentery during World War I. "It's use goes back at least 7,000 years to Egyptian times, when the slaves who built the pyramids were given a daily ration of it, not only to spice their food, but to keep them healthy," says chemist and author Peter Josling, who wrote the book The Complete Garlic Handbook.

In his Natural History, Pliny (A.D.23-79) gave an exceedingly long list of scenarios in which it was considered beneficial. The 2nd century Greek physician Galen eulogized it as the "rustic's theriac" (cure-all).

In 1858, French scientist Louis Pasteur (1822-1895) observed garlic's antibacterial activity, and it was used as an antiseptic to prevent gangrene during World War I and World War II. More recently it has been found from a clinical trial that a mouthwash containing 2.5 percent fresh garlic shows good antimicrobial activity, although the majority of the participants reported an unpleasant taste and halitosis.

In recent times, garlic has been shown to cause modest reductions in blood pressure and cholesterol levels, and has been suggested to have antibiotic properties as well. As early as 1924, garlic was used as a tincture for the treatment of pulmonary tuberculosis or phthisis.

In 2007, a BBC news story reported that Allium sativum may have beneficial properties, such as preventing and fighting the common cold. This assertion has the backing of long tradition. Chinese medicine used garlic for hoarseness and coughs. It was adopted by traditional British herbalists both as an anti-cough syrup and in a salve mixed with lard, which was rubbed on the chest and back of patients. The Cherokee Indians also used it as an expectorant for coughs and croup.

Dr. Stephen Fulder, director of Consultancy and Research of Biomedicine at Oxford University, reports that garlic is now one of the most popular self-medications for lowering blood pressure.

Garlic contains vitamins A and C, potassium, phosphorus, selenium, some 75 different sulfur compounds, and a number of amino acids, which are the building blocks of proteins. The sulfur-containing compound allicin, found in fresh garlic but in only trace amounts in supplements, has been shown to protect against cancers in studies done on animals.

One of the first large studies to suggest a link between garlic consumption and cancer prevention was the Iowa Women's Health Study, published in 1994, which included more than 40,000 women. Researchers found that of all the fruits and vegetables studied, garlic had the strongest association with a decreased risk of colon cancer.

One reason for garlic's beneficial effects may be its ability to lessen the amount of free radicals present in the bloodstream. According to a study published in Life Sciences, a daily dose of one milliliter per kilogram of body weight of garlic extract for six months resulted in a significant reduction in oxidant (free radical) stress in the blood of patients with atherosclerosis. Since atherosclerotic plaques develop when cholesterol circulating in the bloodstream is damaged or oxidized, garlic's ability to prevent these oxidation reactions may explain some of its beneficial effects in atherosclerotic cardiovascular diseases. A German study publishes in Toxicology Letters indicates that garlic also greatly reduces plaque deposition and size by preventing the formation of the initial complex that develops into an atherosclerotic plaque. Called "nanoplaque," it is formed when calcium binds to proteoheparan sulfate and then to LDL cholesterol. Garlic prevents the binding of calcium to proteoheparan sulfate, thus decisively inhibiting plaque generation.

Research presented at the 6th Annual Conference on Arteriosclerosis, Thrombosis and Vascular Biology held by the American Heart Association in Washington, D.C., suggests that garlic can help prevent and potentially reverse atherosclerotic plaque formation. The laboratory studies, conducted by well-known German scientist Professor Guautnter Siegel, M.D., from the University of Medicine in Berlin, Germany, found that powdered garlic reduced the formation of nanoplaque (the first building blocks of atherosclerotic plaque) by up to 40 percent and reduced the size of the nanoplaque that did form by up to 20 percent.

Laboratory research by Swedish scientists published in the August 2005 Proceedings of the National Academy of Sciences reveals the mechanism behind garlic's cardiovascular benefits. The compounds in garlic responsible for its pungency also excite a neuron pathway providing cardiovascular benefits. Garlic's pungency - and that of the other members of the Allium genus, such as onions, leeks and chives - results from its organosulphur compounds, allicin and DADS were found to activate perivascular sensory nerve endings, including the relaxation and enlargement of blood vessels, lowering blood pressure and improving blood flow throughout the body.

One of the breakdown products of allicin is S-allyl Cycteine (SAC), a water-soluble chemical shown by studies at Pennsylvania State University to kill or retard the growth of breast cancer cells. Another study at the same university showed diallyl disulfide (DADS) and diallyl trisulfide (DATS), both oil-soluble garlic components, kill or retard the development of lung, skin and colon cancers.

Why is solubility important? There are two systems of circulation in the human body, one for water-soluble solutions (the arterial/venous system) and one for fat or oil-soluble compounds (the lymphatic system). Since some cancer cells spread via the lymphatic system, the oil-soluble DADS or DATS can seek them out. SAC can spread throughout the body to find cancer cells via the circulatory system, due to its water-solubility. The compounds retard the cellular division and, therefore, growth of cancer cells in the body via both channels, increasing the chance of being able to control, of slow down the rate of development of the cancer. It's good to know that garlic has both kinds of compounds.

"It has long been argued that garlic can fight a wide range of infections and now we have provided biochemical evidence for this claim." The medical journal Antimicrobial Agents and Chemotherapy have confirmed the chemotherapeutic "Effects Of Garlic." The researchers were able to study how garlic works at the molecular level using allicin, garlic's main biologically active component.

One study, explains how allicin fights infection. This research supports the notion that garlic is an excellent natural antimicrobial drug that can disable an usually wide variety of infectious organisms.

The second study helps to clarify the role allicin plays in preventing heart disease and other disorders. Scientists revealed and characterized a molecular mechanism by which allicin blocks certain groups of enzymes. Allicin, created when garlic cloves are crushed, protects the plant from soil parasites and fungi and is also responsible for garlic's pungent smell.

A natural weapon against infection, the research revealed allicin disables dysentery-causing amoebas by blocking two groups of enzymes, cysteine proteinases and alcohol dehydrogenases. Cysteine proteinase enzymes are among the main culprits in infection, providing infectious organisms with the means to damage and invade tissues. Alcohol dehydrogenase enzymes play a major role in these harmful organisms' metabolism and survival. Because these groups of enzymes are found in a wide variety of infectious organisms such as bacteria, fungi and viruses, this research provides a scientific basis for the notion that allicin is a broad-spectrum antimicrobial, capable of warding off different types of infections.

Experiments by competent scientists, as well as experiences by ordinary people, have shown beyond any reasonable doubt that consuming garlic generally has the following physical and physiological effects:

How Do Antibiotics Fight Infections

In essence, antibiotics are selective poisons used to kill bacterial ...