How Do Antibiotics Fight Infections 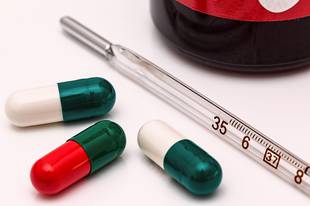 In essence, antibiotics are selective poisons used to kill bacterial cells. Antibiotic loosely translates to "against life". In some senses, all things that kill cells are antibiotic. This includes poisons and toxins, Chemotherapy is antibiotic because it kills cancer cells, and unfortunately some human cells with it. Yet in most definitions, antibiotics are medications we take when we have bacterial infections.

Antibiotics fight infection by either killing bacteria outright, or by inhibiting the growth or development of bacterial cells. The former type is called bactericidal, and the latter, bacteriostatic. The goal of the antibiotic, which can be made of naturally occuring fungi or chemical compounds, is to harm bacterial cells that are making us ill, without harming human cells.

Antibiotics are classed by either how they work or the bacteria against which they are most effective. When bacteria can be killed, the antibiotic disrupting the membrane of bacterial cells normally does this. Antibiotics can also inhibit bacterial growth through keeping bacterial cells from making proteins and acids that they need for survival and reproduction.

In order for antibiotics to be effective, we have to understand the structure of bacterial cells, which fortunately differs significantly from most animal and plant cells. The proteins or enzymes and the DNA structure of bacterial cells are targeted through either natural or chemically produced antibiotics, and at the same time, researches look for compounds that will select only bacteria for attack and not plant and animal cells. It should be noted that antibiotics only fight infections caused by bacteria. They are completely ineffective against infections caused by viruses or fungi.

Unfortunately, humans host many types of bacteria, and some types are quite beneficial. Broad-spectrum antibiotics leave human cells alone, but often have an effect on the good bacteria we carry. This can result in complications from taking antibiotics, like getting yeast infections or nausea, vomiting and diarrhea.

Antibiotics have been around since Scottish bacteriologist Alexander Fleming discovered Penicillin in 1928. As a rule, antibiotics help our body kill the bacteria causing the infection for which they are prescribed, and inhibit its growth and help the body fight its own battle.

Antibiotics can only do their job when taken as prescribed. For example, if a patient only takes a portion of his medication and stops when he begins to feel better, he is not giving his immune system enough time to eliminate the infection. As a result, the infection will likely rise again to a level where the body cannot fight it. Another consequence is that the microbe causing the infection will be more resistant to the antibiotic prescribed.

Trends in medicine today also include verifying that people have a bacterial infection prior to prescribing antibiotics. This method is more widely used since certain bacteria have evolved that are much more resistant to many antibiotics. Infections caused by Methicillin-Resistant Staphylococcus Aureus (MRSA) are exceptionally difficult to treat with regular broad-spectrum antibiotics.

Over time, some strains of staph bacteria have become resistant to treatment by penicillin-based antibiotics - because bacteria, like all life forms, evolves. People with MRSA infections have to take specialized antibiotics, which are much harder on the body, in order to kill MRSA bacteria. Overuse and misuse of any type of antibiotics can create antibiotic-resistant bacteria that are very difficult to fight. Therefore, physicians are especially advised to make sure to only prescribe
antibiotics when they are absolutely necessary, in order to slow down the evolution of antibiotic-resistant bacteria.

The following is a general guidelines for uses, precautions and undesirable effects of four different antibiotics, taken from The New Consumer Drug Digest.

CEPHALOSPORINS: Given orally or by injection, generally used against infection of the throat, ear, skin and urinary tract. Potential side effects include diarrhea, nausea and vomiting, rash and itching all over the body, joint pain, fever, swollen glands and stomach cramps. Patients receiving Cephalosporins should notify their doctor if they are taking alcohol or medication containing alcohol and anticoagulants, because of the possibility of dangerous interaction.

ERYTHROMYCINS: Given orally or by injection, commonly used against infection of the throat, ear and skin, as well as pneumonia and diphtheria. Possible side effects include nausea, vomiting and diarrhea. Erythromycin should not be taken with highly acidic foods or beverages because the acid can affect the drug's effectiveness. Before taking the drug, notify your doctor if you have antibiotic allergy, and if you are taking acetaminophen, oral contraceptives, anabolic steroids, antithyroid agents and hormone supplements.

PENICILLINS: Penicillin-based drug are used to treat a wide spectrum of bacterial infections. They are not, however, effective against viruses, fungi, rickettsiae or yeasts. Allergic reaction to Penicillin is quite common and may be sever, and test must be administered first befre taking the antibiotic. Common side effects include rashes and itching, nausea, vomiting, diarrhea, and irritation of the mouth or tounge. Women taking oral contraceptives should be aware that the use of Penicillin-based drug could diminish the effectiveness of their birth control, resulting in menstrual bleeding and possible unwanted pregnancy.

TETRACYCLINES: Given orally or by injection, commonly used to treat ear and sinus infections, as well as pneumonia, tonsilitis, inflammation of the pharynx, bronchitis and whooping cough. Tetracycline-based drugs belong to the group of broad-spectrum antibiotics. Initially, the drug may cause loss of appetite, diarrhea, nausea and vomiting, stomach cramps and temporary darkening of the toungue. Patients taking the antibiotic may also experience extreme sensitivity to sunlight. Ask your doctor's advice on how to take the drug if you are consuming antacids, laxatives, dairy products, and iron supplements.

As a general caution, it is advisable to consumers not to readily take pharmaceutical antibiotics whenever they feel ill and suspect to have infection. Our immune system has a built-in defense mechanism against infection (Notice how our body heats up, hence the fever, at the onset of infection). Consult the doctor first. Ask your physician if you can make use of herbal alternatives whenever possible. Garlic, one of the most powerful natural antibiotics, is an excellenct choice.