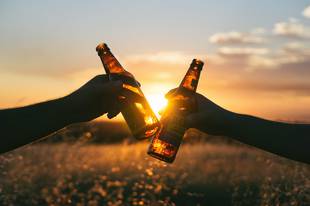 There are a number of different forms of alcohol, most of which are considered to be deadly poisons. The one form of alcohol that can be safely ingested by humas is ethanol, and even that's a matter of dispute among experts. Consuming any alcoholic beverage introduces a certain amount of pure ethanol into a system not readily designed to process it in large quantities. The average healthy liver, for example, can only process one ounce of ethanol per hour, which is a very low amount for a heavy social drinker to ingest.

So how does alcohol actually make you feel intoxicated? The answer lies in the nature of ethanol and your body's central nervous system. When you take your first drink of an alcoholic beverage, 20 percent of the ethanol reaches your bloodstream through your stomach. On average, the brain receives its first jolt of ethanol within 30 seconds of ingestion. It may not be much of a hit, but it does start a chain of events which leaves you feeling intoxicated.

Ethanol molecules are very small, which means they can pass through the barrier between the bloodstream and brain quickly. Once the ethanol molecules reach the area of the brain responsible for controlling the central nervous system, a number of things happen. Ethanol is considered a depressant, so when it comes in contact with a specific neurotransmitter called Gamma-aminobutyric acid (GABA), it causes the reaction time between neurons to slow down. Essentially, your brain's brakes have failed and the GABA is now too impaired to call for help. This is the very beginning of feeling intoxicated.

Meanwhile, the rest of the ethanol has had time to reach the small intestine and is now entering the bloodstream. More ethanol molecules arrive in the brain and continue to depress or slow down the normal functions of the central nervous system, including the areas of the brain responsible for social caution and good judgment. This is why many people lose their inhibitions and become the life of the party while intoxicated. The ethanol has effectively neutralized the brain's natural "don't do that" switch.

While the brain tries to deal with this new intoxicated sensation, the liver is working overtime to metabolize or convert the ethanol into a harmless form of sugar. A healthy liver can only process a certain amount of ethanol per hour, so the drinker becomes even more intoxicated as the excess continues to flow through the bloodstream and into the brain. More ethanol in the brain means more possible damage to the central nervous system. As the drinker's level of unmetabolized ethanol rises in his or her bloodstream, the depressing effects become more pronounced. When an intoxicated drinker's blood alcohol count (BAC) reaches a certain percentage, generally around 0.07 to 0.09 percent ethanol levels, then tasks such as driving become illegal or seriously not advisable.

As long as the ethanol remains unmetabolized by the liver, the central nervous system will still be impaired and the drinker will still feel intoxicated. This process of eliminating the ethanol from the system could continue for hours, depending on the initial amount of alcoholic beverages consumed. It is possible to consume enough ethanol to cause death, either by compromising the central nervous system beyond repair or by choking on vomit after the natural choking reflex has been suppressed. BAC readings of 0.50 or more are generally considered fatal.

Eventually the level of ethanol in the bloodstream should be reduced significantly and the neurotransmitters of the central nervous system will fire at their normal rate. A recovering drinker should no longer feel intoxicated within 24 hours or so of his or her first drink. Dehydration and other factors may create a painful sensation known as a hangover, but at least the drinker's central nervous system is no longer too impaired to do its job properly.

If you are reading this article maybe you are already ...

How To Wake Up Refreshed In The Morning

Waking up early in the morning is a hassle to ...