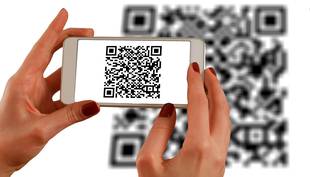 Radio frequency identification technology, known commonly as RFID, is becoming an efficient way of tracking items through a supply chain. An RFID device is a small package, or tag, that includes a microprocessor and an antenna, and can be attached to products. The location of an item with an RFID tag can be determined using an RFID reader, which emits radio waves and receives signals back from the tag. The reader is also sometimes called an interrogator because it “interrogates” the tag. Since microprocessors continue to become more powerful and less expensive, according to Moore’s Law, RFID technology has reached a point where it is inexpensive enough to be cost-effective. Today, most materials are tracked using bar codes and bar-code readers. Bar-code labels can degrade in bad weather, and an employee has to point a bar-code reader at the bar code to read it. RFID technology does not need this line-of-sight connection, and can withstand most environment stresses.

Pharmaceutical firms are also working toward adopting RFID technology, to comply with upcoming FDS regulations that would require track-and-trace technology on all drug packages to prevent counterfeiting. Johnson & Johnson uses RFID technology to keep track of heart stents. Stents have a three-month shelf life, so managing inventory is time-sensitive, but the stents need to be available at the hospital for emergency heart surgeries. Since each stent is worth about $2,500, it pays for the company to keep track of every stent. Johnson & Johnson can read the data remotely and deliver stents to hospitals that are in need.

Companies involved in manufacturing and selling RFID technology, including IBM, claim that their customer’s projects experience a return on the RFID investment in less than 18 months. Consumer goods companies, with their large number of customers, are especially interested in applying this new technology, so they can track products better as they move through the supply chain. The British retail giant Marks & Spencer has been tagging items in one pilot store. To avoid privacy concerns (such as tracking the wearer of a garment), the RFID are easily detachable. Eddie Dodd, the chief technology officer of British Telecom’s Auto-ID services, which provides the RFID readers to Marks & Spencer, says “RFID undoubtedly gives you clear visibility into what’s happening to your supply chain with a degree of accuracy.” Another U.K. giant, the food chain Tesco, piloted RFIDs with the goal of integrating the technology on the individual item level, but recently scaled back its RFID plans. Tesco is now placing RFIDs on roll cages (which hold items such as milk) and pallets.

Procter & Gamble is using RFID technology to collect information about the sales of its products. The company uses its RFID-gathered data on fluctuation in sales of Pampers and Luvs diapers to help manage its supply chain processes. Although P&G sells disposable diapers to a population that is fairly constant, a slight change in the number of diapers sold at stores can be amplified by traditional supply chain planning processes, causing large fluctuations in demand throughout the supply chain, a phenomenon known as the bullwhip effect. There are two primary reasons that the bullwhip effect occurs. First, the relatively smooth daily demand for products gets aggregated into occasional larger orders from stores to distribution centers. The stores and distributors then aggregate these large orders into even larger and less frequent orders to the manufacturer. The second source of demand fluctuation is the human behaviour that results from the potential for a delay in receiving a product. Like people waiting for an elevator who repeatedly push the call button in an attempt to speed the elevator’s arrival, companies sometimes place multiple orders for a product when they suspect a potential shortage or delay, only to cancel the additional orders when the deliveries begin to arrive. The bullwhip effect has been under-stood for a long time. The only way to alleviate this problem is to have better information for planning, which is what RFID technology promises to provide. To figure out how many unsold diapers are in a particular store, someone has to either count all the packages on the shelf and in the back room, or use a bar-code reader and scan them. RFID tags eliminate the manual counting process. Determining the number of items in inventory in a building becomes automatic. With RFID, real-time inventory data are always available. RFID tags store detailed data, such as production lot number and production date, which provides even more benefit when items have an expiration date or are subject to recall, like Fitter Snacker’s line of NRG bars.

Should You Turn Your Hobby Into A Business?

Will I enjoy doing my hobby on a deadline? That's ...

How To Shop Online Hassle-Free

Personal computers have become standard appliances in many homes today ...