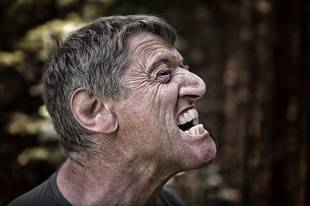 A convulsion is a violent and abnormal muscular contraction of the body, usually of violent onset, accompanied by rigidity of the muscles of the body, usually lasting from a few seconds to about half a minute and followed by jerking movements, bluish discoloration of the face and lips, foaming at the mouth or drooling, and, finally, gradual subsistence of the paroxysm, after which the victim is usually drowsy or disoriented for a time. During the period of rigidity, the victim may stop breathing, may bite his tounge severely, and may lose bladder and bowel control.

In an infant or small child, a convulsion may occur at the onset of an acute, infectious disease, particularly during a period of high fever or severe gastrointestinal illness. Convulsions that develop later in the course of measles, mumps and other childhood diseases are more serious and might reflect complications of the central nervous system.

Convulsions associated with head injury or brain disease - such as a tumor, an abscess, or hemorrhage - tend to be localized, with rigidity and jerking of groups of muscles, instead of the whole body.

Convulsions can also be caused by eclampsia, a condition that occasionally develops in the late stages of toxemia of pregnancy. Eclampsia can usually be prevented by proper prenatal care. The victim should receive immediate hospital treatment.

First aid for convulsion should be directed primarily at keeping the victim from hurting himself. If the attack is prolonged and the victim stops breathing, give him mouth-to-mouth or mouth-to-nose resuscitation. If repeated convulsions occur, immediately call for medical help or take the victim to a hospital.

Epilepsy is not a specific disease but rather a symptom-complex based upon many causes. Among these are injury and infection. During recent years, research has extended greatly the medical understanding about epilepsy and has made available more effective treatment. The untreated patients and occasionally some of those under care are subject to attacks of unconsciousness. These may last only a second or so and perhaps be unrecognized; or they may be obvious, associated with a fall and with convulsions involving the entire body. The violent attack usually subsides within a few minutes or less, but the person may suffer injury during the convulsion by striking against objects or by biting his tongue. When known epileptics suspect an attack, they should seek a quiet place immediately and lie down with a bit between the teeth.

Do not restrain the person in his convulsions, but protect him against injury. Push away nearby objects. Try gently to prevent him from biting the tongue by placing an appropriate object, such as the edge of a book cover or spoon handle wrapped in a clean handkerchief or napkin, between his upper and lower teeth on one side of the mouth. Do not obstruct breathing. When the jerking is over, loosen the clothing about the neck and allow him to lie flat with the head turned to one side.

The appendix, a worm-shaped structure that projects from the first section of the large intestine, is about 3 1/2 inches long and has a cavity running down its center. It has no known function or importance in humans. It is not clear as to why on occasion the appendix will become inflamed, swollen, and filled with pus, producing appendicitis.

1. Pain starting in the upper abdomen or around the navel and setting in the lower right side of the abdomen
2. Nausea and vomiting
3. Urge to pass stool or gas
4. Lack of appetite

Your physician will ask you questions about the symptoms, including whether you have lost your appetite, have difficulty or discomfort in urination, or have an unusual urge to pass gas or move your bowels. Your abdomen will be examined carefully, and a rectal examination will be performed. Abdominal tenderness is an important sign.

If you have acute appendicitis, you will be admitted to a hospital immediately. Depending on your symptoms, a blood test and urine analysis may be done.

How Serious Is Appendicitis?

Peritonitis, a serious infection of the abdominal cavity (peritoneum), may develop if the appendix bursts.

The standard procedure is to remove the infected appendix surgically. Removal of the appendix does not affect digestion.

A blockage of blood flow or bleeding (hemorrhage) in the brain can result in a medical condition called a stroke. Symptoms of stroke may include:

A stroke is a brain attack. Seek immediate medical assistance, just as you would for a heart attack. Every minute counts. The longer a stroke goes untreated, the greater the damage. Success of treatment may depend on how soon care is given.

The warning signs may be temporary, lasting from a few minutes to 24 hours but even symptoms lasting only a short time may indicate a stroke. Treat them seriously.

While waiting for an emergency vehicle to arrive, watch the person suspected of having a stroke. If breathing ceases, CPR or cardiopulmonary resuscitation is necessary. Minor breathing difficulty may be alleviated by positioning the head and shoulders on a pillow. Watch for vomitting and potential aspiration of vomit into the lungs. If vomitting occurs, turn the head to the side.

Do not allow the person to eat or drink anything. If paralysis is present, protect the paralyzed parts.

How To Lose Weight Without Exercise

I know losing weight is one of your dilemma since ...