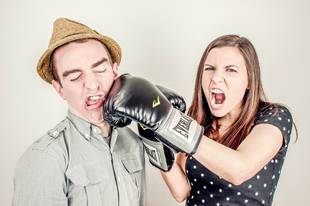 It is very apparent that the male and female human anatomy have distinct differences both in physical and genetic makeup. Aside from the sexual differences, men generally have bigger and more muscular body, while women have more pronounced breasts and longer legs.

How about subtle difference like intelligence and reasoning? Are there any differences between men and women's mental attributes? How is man's brain differ from his female counterpart?

Men and women's bodies are obviously different; so are their behaviors. Researchers frequently discover physiological differences between the brains of men and women. For example, an average male brain has approximately four percent more cells and 100 grams more brain tissue than an average female brain. However, both sexes have similar brain weight to body weight ratios. But do these structural differences account for thinking and learning differences?

Although men generally have larger brains, men and women consistently score almost equally well on intelligence tests. However, some recent studies by Doctors Ruben and Raquel Gur of the University of Pennsylvania Medical Center showed that the men scored higher on tests related to spatial and mathematical skills while the women were more proficient at verbal tests. According to them, this is because of the proportional difference between white and grey matter in men and women's brain.

The researches found that male human brains have a higher volume of white matter and cerebrospinal fluid. White matter facilitates the transfer of information across the brain, thus creating an individual's sense of spatial orientation. Female brains, on the other hand, are denser in grey matter, consisting of neuronal cell tissues and connection-making dendrites, which enable women to make quick comparisons. These neurological differences make men and women distinct thinkers.

In navigating their way around somewhere new, for example, men would tend to use their more highly developed spatial skills, whilst women would depend on their neuronal ability to link things together quickly to identify sequences of landmarks and figure out how they all connect.

Is the male brain better for spatial task? This view is supported by the research of Dr. Godfrey Pearlson, professor in the Department of Psychiatry, Behavioral Science and Mental Hygiene at John Hopkins University Medical School. In an ongoing series of studies he has found that a part of the brain, the inferior parietal lobe (IPL), is generally larger in male brains than in females. The IPL is involved in spatial and mathematical reasoning skills, at which boys tend to perform better than girls. This, however, according to Dr. Pearlson, are results between groups of boys and girls and should not be taken for every individual's capability.

According to the research conducted by Dr. Sally Shaywitz and her colleagues at the Yale University, anatomical differences are not all that separate how men and women's brains function; hormonal differences may also play a part. They found out that estrogen may contribute to the brain's capacity for reading. This conclusion was reached after post-menopausal women who were given estrogen showed more pronounced activity in the left hemisphere of their brain as they encoded words or figure, and more activity in the right hemisphere as they retrieved these stimuli than a control group given only a placebo. This provides another possible explanation on why women generally perform better on language tests than men, as the estrogen appeared to affect the relevant brain circuitry.

In his book, The Sexual Brain, Dr. Simon Le Vay narrated other distinction, which can be related to both neurological and functional differences in human male and female brains. He believes that there are gender differences in the more primitive parts of the brain, such as the hypothalamus, where most of the basic functions of life are controlled, including hormonal control through the pituitary gland.

Dr. LeVay discovered that the volume of a specific nucleus in the hypothalamus is twice as large in heterosexual men than in women and homosexual men, thus prompting a heated debate whether there is a neurobiological basis for homosexuality.

There are now qualified neurological differences between men and women as evidenced by recent scientific studies. But do these differences translate into superiority or inferiority between genders?

According to Dr. Pearlson, this is not the absolute conclusion. "To say this means that men are automatically better at some things than women, vise versa, is a simplification. It 's easy to find women who are fantastic at math and physics and men who excel in language skills. Only when we look at very large populations and look for slight but significant trends do we see the generalizations. There are plenty of exceptions, but there's also a grain of truth revealed through the brain structure that we think underlies some of the ways people characterize the sexes."

Furthermore, scientists were skeptical to limiting the differences between genders to the role of genes and neurological anatomy alone because cultural learning is very powerful and influential among humans.

Social scientists believe that only when environment and social learning were ruled out that there may exist a great deal of neurophysiological differences between the male and female brains.

Would these neurophysiological differences be enhanced by experiences and upbringing? Are girls more prone to play with dolls because these were toys available to them during childhood? Are they more social and talkative because their parents talk to them more than the boys?

According to the Society for Neuroscience, evolution may have played a great deal about the functional differences that the present human brain inherently have between genders. "In ancient times, each sex had a very defined role that helped ensure the survival of the species. Cave men hunted. Cave women gathered food near the home and cared for the children. Brain areas may have been sharpened to enable each sex to carry out their jobs."

The advantage of women regarding verbal skills also makes some evolutionary sense. While primitive men have the bodily strength to compete with other men, women use language and verbal skills to gain social advantage, such as by argumentation and persuasion.

A summary of independent studies by various groups list several functional differences in behavior of boys and girls, and although their general findings are yet to be proved by neuroscience, it is quite useful as a tool for comparison:

Females are generally better at:

-Most language and verbal skills
-Memorization of words and colors
-Reflective vocabulary
-Recognizing landmarks
-Artistic skills including graceful movements
-Facial recognition
-Works well collaboratively
-Perceptual speed such as the ability to swiftly identify matching items.
-Coordinating several movements at the same time
-Works are based on neatness and focus

Males are generally better at:

It is hard to believe that all these and much, much more are differences created by a single chromosome. And yet as we marvel at the mystery of Creation, the brain, the mind, whether male or female, is the only thing that cannot be replaced or transplanted. Indeed it is epitome of God's marvelous hand!

Want A Self Upgrade? Why Don't You Try These

Ever wonder how to become an achiever? But before that, ...