National Power Of Large Corporations And Cost And Benefits 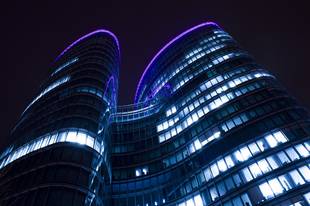 The giant capitalist corporation arose due to the need for economic organizations that would produce sophisticated goods, equipments, and services in enormous quantities and on an unprecedented scale. A “corporation” is an organization created by law that has an ongoing existence and powers and liabilities that are distinct from those of its owners and employees. For example, if you have an accident because the steering mechanism on your new car jams, you sue General Motors, not the engineer who designed the car or the mechanic who neglected to tighten the bolt. A corporation, in other words, is a legal entity in its own right. Individual personnel – even corporation presidents – come and go but the corporation lives on:

Many corporations are owned by literally thousands of stockholders. The collective resources and capital provided by these investors are immense. For example, Exxon, the largest American Corporation on the basis of its sales and assets, had profits of nearly $4.2 billion in 1982, more than the gross national products of Nepal, Bolivia, Panama, Iceland, Zambia, and a number of other nations. Its sales (more than $97 billion) exceeded the gross national products of most nations of the world. Corporate control of such enormous resources has vast ramifications for national life. (Light, 1987)

The National Power of Large Corporations

Light (1987) gives us the following facts and insights about large corporations:

Many capitalist industries are “oligopolies” – industries dominated by only a few large films. Economists point out that when a few corporations provide nearly all of a particular product, those companies are virtually free from the restraints that exist in a competitive market. They can charge as much for the product as consumers will pay before they turn to less desirable substitutes. Through extensive advertising, corporations can often ensure that demand for their product will remain high despite an inflated price tag. In addition, by taking out patents, controlling raw materials, and either convincing the government to suppress competition or colluding with other corporations, oligopolies can prevent new firms from entering the market. They can also buy up other companies – competitors, suppliers, manufacturers of related or different products – and become a “conglomerate”, thus controlling even larger amounts of resources and greater number of jobs through subsidiaries.

Large corporations are free to decide what new technologies to explore through research and development and what innovations will be translated into new products and services. Technology has a profound impact on all aspects of social life. If, for example, Ford and General Motors had just all of their assets into developing high-quality public transportation (such as electric trains), instead of private automobiles, America’s settlement patterns, dating habits, and even foreign policy with oil-producing nations would be quite different from what they are today.

The national power of giant corporations is not confined to the economy. Corporations yield considerable political power as well. On the state and local levels, national firms can promise to build or expand in a given area, or to withdraw from that area if legislatives do not pass the taxes, zoning regulations, and road plans that suit them. They can, with certain restrictions; also help finance the election campaign of public officials – an especially effective tool today when media advertising is so essential to reaching voters, and so costly.

At the national level, corporations also use campaign contributions to influence politics. E.g., to persuade officials that certain legislation should or should not be passed. Finally, corporate leaders can influence national politics through outright bribery and collusion.

The Global Power of Multinationals

A multinational corporation is a primitive business firm with operations and subsidiaries in many different countries (Light, 187). They are companies or industrial firms that operate in more than one country. Today’s multinational corporations are not simply buying and selling abroad; they are actually “producing” there. Foreign operations are usually wholly owned subsidiaries controlled by home country nationals. While maintaining a domestic identity and a central office in a particular country, MNC’s now aim to maximize profits on a world-wide basis. The corporation is so large and extended that it may be outside the control of a single government. Besides subsidiaries, a MNC may have joint ventures with individual companies either in its home country or in foreign countries.

Multinational corporations, also called MNC’s and TNC’s (transnational corporations have developed since WWI ended in 1945. MNC’s have great economic power. The largest MNC’s include EXXON, Ford, General Motors, IBM (USA); Royal Dutch/Shell Group (oil – Netherlands/United Kingdom); Mitsui (Wholesaler-Japan), and Volkswagen Group (automotive-Germany), each of which has reported annual sales of greater than 15 billion U.S. dollars. This figure is larger than the gross national products of over 80% of the world’s countries.

In the Philippines, the top 10 multinational corporations include:

Indeed, the financial resources of major MNC’s are so large that these companies often can manipulate the economies of the nations in which they operate. For example, should a MNC decide the a country’s currency is overvalued or unsafe, they can shift to another country’s currency. Or if they believe that a particular nation is politically unsympathetic or unstable, they can take their investments elsewhere. Such decisions have a profound impact on the wealth of nations. Furthermore, by investing capital and shifting assets and operations abroad, they are able to:

MNC’s indicate that a new economic power structure is emerging – one that transcends the political power of nations. Global corporations, with their enormous economic resources, influence the prosperity, balance of payments, and political strength of the countries in which they operate. (Light, 1987)

Costs and Benefits of MNC’s and TNC’s

Multinational corporations are primarily motivated by the maximization of global profits. In the process they have been credited (and discredited) with a list of benefits and costs. Charles Lindsay and Ernesto Valencia catalogued them as follows:

B. Costs (limits to benefits)

1. Utilize local capital at the expense of domestic enterprise; use retained earnings rather than new capital.

2. Worsen balance of payments by:

3. Transfer inappropriate and/or outdated technology; transfer only portions of relevant technologies; economy by patents, secrets and other means undertake only an insignificant amount of research and development locally.

5. Confine skills development to a few areas because of limited demand for other than unskilled labor, and because of limited range of skills used due to the simple nature of equipment and processes transferred to the local economy.

6. Restrict development of local managerial talent because control of operations is to a large extent retained by the home or regional office of the foreign investor and because expatriates are used in key positions.

7. Contribute little to the stimulation of new industries because investments by foreigners are usually in industries in which foreigners or Filipinos are already producing.

9. Contribute to the skewness of the existing distribution of income.

10. Deplete and exhaust the national resources of the country for the benefit of the foreigner.

11. Distort the pattern of production, reinforce the existing pattern of wealth and power, and infringe upon the sovereignty of the nation.

12. Drain our national resources by bringing in minimal capital and raising inordinately large portion of their capital from local resources.

13. Have concentrated power in the hands of a few elites, which has resulted in an aberration of the capitalist system.

14. Death of local industries and closing of small businesses due to monopolistic practice of big companies.

16. MNC’s dominate the trade in natural resources and commodities, resulting in the depletion or degradation of forests, soils, water and marine resources and biodiversity, through mining, drilling, logging, and industrial agriculture.

17. MNC’s dominate the production of most of the world’s toxic chemicals resulting in air, water and soil pollution, occupational hazards and unsafe products.

18. MNC’s are the main entities involved in the transfer of environmentally unsound production systems and hazardous materials to the south and 3rd world countries. Examples include unsafe pesticide and drugs banned in the country of origin, the relocation of polluting industries, the dumping of radioactive wastes in the South Pacific and the export of wastes to Africa, Latin America and Asia.