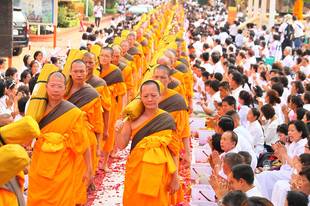 The French sociologist Emile Durkheim identified the four major elements of religion as expressed in his definition of religion:

Because religions are symbolic systems, the range of objects deemed sacred can vary widely. The sacred object can be a supernatural being or force, or a ghost or spirit endowed with supernatural power. It can be a moral principle, or a particular object that symbolized deep-seated feelings. For example, a tribe may consider a forest as a supernatural being while monotheists believe in a single deity called “God”, “Yahweh”, or “Allah”. Sometimes the supernatural element may simply be a “force” which may reside in a tree, a lizard, an oddly chapped stone, a totem, a crucifix or a statue of a saint. Sacred things give the members of a religion a shared sense of the reality of the supernatural, or of what is sometimes called “the holy”.

Sociologists regard rituals as the visible and symbolic expressions of a religion. It refers to prescribed ways of performing religious acts. Examples: group prayers, bible study, evangelizing, singing spiritual songs, or using drugs or magic, food offerings to the gods.

Techniques of religion refer to general acts performed according to the requirements of the beliefs. It refers to overt conduct of the believers implementing the beliefs and feelings.

Important Things You Need To Know About Yoga

This peaceful practice will fire up your circulation and help ...

Food Portion Distortion Is The Best Way To Lose Weight