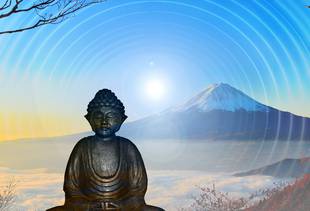 The history of religion is as old as the history of man himself. That is what archaeologists and anthropologists tell us. Even among the most "primitive," that is to say, undeveloped, civilizations, there is found evidence of worship of some form. In fact The New Encyclopedia Brittannica says that "as far as scholars have discovered, there has never existed any people, anywhere, at any time, who were not in some sense religious."

Besides its antiquity, religion also exists in great variety. The headhunters in the jungles of Borneo, the Eskimos in the frozen Arctic, the nomads in the Sahara Desert, the urban dwellers in the great metropolises of the world - every people and every nation on the earth has its god or gods and its way of worship. The diversity in religion is truly staggering.

Logically, questions come to mind. From where did all these religions come? Since there are marked differences as well as similarities among them, did they start independently, or could they have developed from one source? In fact we might ask: Why did religion begin at all? And how? The answers to these questions are of vital importance to all who are interested in finding the truth about religion and religious beliefs.

When it comes to the question of origin, people of different religions think of names such as Muhammad, the Buddha, Confucius, and Jesus. In almost every religion, we can find a central figure to whom credit is given for establishing the "true faith." Some of these were iconoclastic reformers. Others were moralistic philosophers. Still others were selfless folk heroes. Many of them have left behind writings or sayings that formed the basis of a new religion. In time what they said and did was elaborated, embellished, and given a mystic aura. Some of these leaders were even deified.

Even though these individuals are considered founders of the major religions that we are familiar with, it must be noted that they did not actually originated religion. In most cases, their teachings grew out of existing religious ideas, even though most of these founders claimed divine inspiration as their source. Or they changed and modified existing religious systems that had become unsatisfactory in one way or another.

For example, as accurately as history can tell us, the Buddha had been a prince who has appalled by the suffering and deplorable conditions he found surrounding him in a society dominated by Hinduism. Buddhism was the result of his search for a soultion to life's agonizing problems. Similarly, Muhammad was highly disturbed by the idolatry and immorality he saw in the religious practices around him. He later claimed to have received special revelations from God, which formed the Quran and became the basis of a new religious movement. 'Islam'. Protestantism grew out of Catholicism as a result of the Reformation that began in the early 16th century, when Martin Luther protested the sale of indulgences by the Catholic church at that time.

Thus, as far as the religions now in existence are concerned, there is no lack of information regarding their origin and development, their founders, their sacred writings, and so on. But what about the religions that existed before them? And the ones before those? If we go back far enough in history, we will sooner or later be confronted with the question: How did religion begin? Clearly , to find the answer to that question, we must look beyond the confines of the individual religions.

The study of the origin and development of religion is a comparatively new field. For centuries, people more or less accepted the religious tradition into which they were born and in which they were brought up. Most of them were satisfied with the explanations handed down to them by their forefathers, feeling that their religion was the truth. There was seldom any reason to question anything, nor the need to investigate how, when, or why things got started. In fact, for centuries, with limited means of travel and communications, few people were even aware of other religious systems.

During the 19th century, however, the picture began to change. The theory of evolution was sweeping through intellectual circles. That, along with the advent of scientific inquiry, caused many to question established systems, including religion. Recognizing the limitations of looking for clues within existing religion, some scholars turned to the remains of early civilizations or to the remote concerns of the world where people still lived in primitive societies. They tried to apply to these the methods of psychology, sociology, anthropology, and so forth,hoping to discover a clue as to how religion began and why.

What was the outcome? Suddenly, there burst upon the scene many theories - as many as there were investigators, it seemed - with each investigator contradicting the other, and each endeavoring to outdo the other in daring and originality. Some of these researchers arrived at important conclusions; the work of others has simply been forgotten. It is both educational and enlightening for us to get a glimpse of the results of this research. It will help us to gain a better understanding of the religious attitudes among people we meet.

Another English anthropologist, R. R. Marett (1866 - 1943), proposed a refinement of animism, which he called animatism. After studying the beliefs of the Melanesians of the Pacific Islands and the natives of Africa and America, Marett concluded that instead of having the notion of personal soul, primitive people believed there was an impersonal force or supernatual power that animated everything; that belief evoked emotions of awe and fear in man, which became the basis for his emotional response to the unknown. His favorite statement was that religion was "not so much thought out as danced out."

3. Grew Out Of Magic

In 1890 a Scottish expert in ancient folklore, James Frazer (1854-1941), published the influential book The Golden Bough, in which he argued that religion grew out of magic. According to Frazer, man first tried to control his own life and his environment by imitating what he saw happening in nature. For example, he thought that he could invoke rain by sprinkling water on the ground to the accompaniment of thunderlike drumbeats or that he could cause his enemy harm by sticking pins in an effigy. This lead to the use of rituals, spells, and magical objects in many areas of life. When these did not work as expected, he then turned to placating and beseeching the help of the supernatural powers, instead of trying to control them. The rituals and incantations became sacrifices and prayers, and thus religion began. In Frazer's words, religion is a "propitiation or conciliation of powers superior to man."

Even the noted Austrian psychoanalyst Sigmund Freud (1856-1939), in his book Totem and Taboo, tried to explain the origin of religion. True to his profession, Freud explained that the earliest religion grew out of what he called a father-figure neurosis. He theorized that, as was true with wild horses and cattle, in primitive society the father dominated the clan. The sons, who both hated and admired the father, rebelled and killed the father. To acquire the father's power, Freud claimed, 'these cannibalistic savages ate their victim.' Later, out of remorse, they invented rites and rituals to atone for their action. In Freud's theory, the father figure became God, the rites and rituals became the earliest religion, and the eating of the slain father became the tradition of communion practiced in many religions.

Numerous other theories that are attempts to explain the origin of religion could be cited. Most of them however, have been forgotten, and none of them have really stood out as more credible or acceptable than the other. Why? Simply because there was never any historical evidence or proof that these theories were true. They were purely products of some investigator's imagination or conjecture, soon to be replaced by the next one that came along.

9 Types Of Girlfriend You Must Know Before Dating

If you are reading article out of curiosity, Maybe you are a man ...