Food Portion Distortion Is The Best Way To Lose Weight 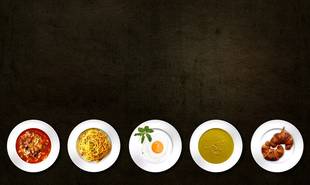 Packaged food plans work for weight loss – but they’re pricey. We tried one service and cribbed its smart tricks for a slimmed-down kitchen.

“You’ve gained weight.” Those were my doctor’s first words at my checkup last year. Ouch.

I knew I’d been stress-eating, and the result was an extra eight pounds. Someone suggested a service that delivers calorie-controlled meals to lose it. At $200 a week, that was a whole lot of (reduced-fat) cheddar to drop. But my dad surprised me with a birthday check and instructions to blow it on an indulgence. I splurged.

The first morning, an insulated tote arrived at my door, containing three meals, a snack, and dessert – all within my allotted 1,200 - 1,400 daily calories. It was tasty, though portions were tiny: Lunch and dinner – a chicken-mango-aragula salad, plus shrimp with black beans and veggies – were Lean Cuisine-sized. Tomatoes with goat cheese for a snack. Just enough strawberry trifle dessert to fill an espresso cup.

By the day three, my stomach was rumbling, I panicked, thinking, There’s not enough food!i But after my snack, and then dinner and dessert, I felt fine. Once I’d adjusted to the portions, my hunger went away.

By month’s end, I lost six pounds. After another 30 days, I shed three more. Then I started to worry. What happened when I couldn’t afford the luxury anymore?

Determined not to backslide, I started re-creating the dishes and employing strategies I’d learned from the meal service. The scale has held steady ever since.

I’ll share the tricks that stuck around after the boxes stopped arriving at my doorstep.

Here are the secrets that helped me drop the weight and keep it off. They’ll work for you, too – no delivery meal plan required.

My first breakfast on the plan was two super thin slices of French toast with a thimbleful of syrup. It was then that I realized I’d been eating way too much food.

Turns out I’m not alone in my portion distortion. The average dinner plate has grown 36 percent over the past five decades, Cornell University researchers say.

My delivery-service diet carefully measured portions. In my plan, proteins were 3 ounces, about the size of a deck of cards, and grains were ½ cup – say, half a baseball.

“To make sure you’re eating the right amount, measure your food for a day or two,” says Alison Massey, RD, director of diabetes education at Mercy Medical Center in Baltimore.

Getting used to these smaller servings took about a week. Following the plan’s recommendation to spend 30 minutes enjoying each meal helped quite a bit.

To pace yourself, sit at the table for meals and put down your fork between bites.

“When you’re cutting calories, herbs and spices can prevent your from feeling deprived,” says Lauren Harris-Pincus, RD, the founder of a program called Nutrition Starring YOU. According to a study in the journal Appetite, people enjoyed the reduced-fat version of a dish as much as they did the full-fat one when herbs and spices were added.

In my delivery meals, harissa, a Tunisian hot sauce, gave vegetables a kick, and parsley and min dressed up meatballs.

So try subbing in herbs and spices for fat in your cooking. Fold curry into a cauliflower mash or mix rosemary into a turkey patty.

Along with delivering nutrients, such ingredients can lessen your saltshaker dependence.

The AHA research found that when people flavoured food with herbs and spices, they reduced sodium intake by 996 milligrams a day. That’s a lot!

Whether it was cannellinis floating in a chicken-vegetable soup or black beans flecked with red onion Cuban-style, my delivery meals were often brimming with legumes.

“Beans are high in both fiber and protein, which can keep you satisfied longer,” says Rebecca Cipriano, M.D., founder of Pop Weight Loss in Freehild Township, New Jersey.

In fact, researchers at St. Michael’s Hospital in Toronto found that people felt 31 percent fuller when their meals contained a cup of beans than when they didn’t.

Over time, this may add up to some dropped pounds. In one study, people who ate beans regularly weighed an average of seven pounds less than those who didn’t.

To bulk up your meals and feel fuller faster, add ½ cup of legumes to soups, salads, and entrees. For a healthy snack, Cipriano recommends pureeing your favorite beans with lemon juice, olive oil, and spices to serve as a sliced-veggie dip.

My delivery snacks – including a roasted pear and ricotta crostini with arugula, and spicy shrimp with papaya salsa – resembled mini masterpieces. They were much more enjoyable than my typical vending-machine picks and far better for me.

Munching a bag of chips doesn’t feel like an eating experience. Massey explains. “But having a snack that’s full of different tastes and textures is more memorable and satisfying,” she says.

For a treat that’s worth the calories, look for a combo of protein and vegetables with a mix of flavors, such as whole grain bread topped with a little egg salad and a few tasty red sweet pepper slices.

No time to prep? Jazz up basic snacks – dust almonds with cocoa or top low-fat Greek yogurt with pomegranate seeds.

My starches used to be all white. To my surprise, I enjoyed the fragrant whole grains, like nutty-tasting farro and smoky Chinese black forbidden rice, in my delivered meals.

Besides boosting flavour, these whole grains helped stop my urge to graze.

In a Tufts University study, people who ate mostly whole grains had 10 percent less belly fat – the kind linked to chronic illnesses like diabetes and heart disease – than those who consumed no whole grains.

To incorporate whole grains into your diet, be creative. You can whip up hot quinoa topped with fresh apple slices and cinnamon for breakfast. Or try folding wild rice of barley into your favorite casserole recipe. You can use rolled oats in place of bread crumbs in meat loaf.

Knowing what I was going to have throughout the day prevented me from eating mindlessly. It was also easier to hold off when I knew when my next meal was coming.

“Planning is the key to staying on track,” Massey says.

She recommends setting aside time each weekend to prepare a few staples: Grill chicken breasts, roast vegetables, and make beans in the slow cooker.

“That way you can easily mix and match sides and proteins for your lunches and dinners,” she says.

During the week, take a few minutes every evening to portion out your breakfast for the next day and pack a healthy lunch and snack for work.

The weekend is a great time to bulk-cook staples that make it easier to prep the week’s worth of meals at home. Big batches of pasta sauce, black beans, and hearty soups last a long time and are super versatile.

Dining out? Review the restaurant’s menu online beforehand and decide on some healthy options. You can choose one once you get to the restaurant.

Seafood Provencal that is good for 4 serving Although most ...

Sesame Glazed Salmon that is good for 2 servings. Fish ...