Characteristics Of Good And Poor Adjustment In Old Age 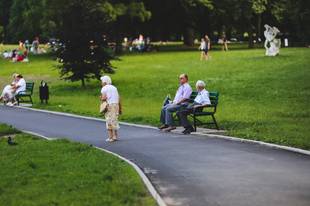 The first criterion that can be used to assess the kind of adjustments elderly people make is the quality of their behaviour. As was pointed out earlier, there are two different and contrasting theories of successful aging: the activity theory and the disengagement theory. According to the activity theory, men and women should maintain the attitudes and activities of middle age as long as possible and then find substitutes for the activities they must give up – substitutes for work when they must retire, substitutes for the clubs and associations they are forced to give up for financial or other reasons, and substitutes for friends or relatives they lose through death or moves to other communities.

According to the disengagement theory, men and women curtail, either voluntarily or involuntarily, their involvement in the activities of middle age. They cut down their direct contacts with people, for example; they feel carefree to do as they please and when they please; they are little influenced by the opinions of others; and they do things that are important to them, regardless of how the social group feels about them. It is, however, important to realize that disengagement is not an overnight occurrence nor does it affect all areas of the individual’s life simultaneously. Instead, it is a gradual process.

Common Characteristics of Good and Poor Adjustment in Old Age

In general, there is evidence that those who made good adjustments when they were younger will make good adjustments when they are old. As Cicero pointed out in his De Senectute, “Those with simple desires and good dispositions find old age easy to take. Those who do not show wisdom and virtue in their youth are prone to attribute to old age those infirmities which are actually produced by former irregularities.” How the individual meets the stresses of adolescence and adjusts to them will influence adjustment to old age because patterns of adult attitudes and behaviour are set then.

The cultural milieu in which the elderly lived during the formative years of their lives also affects the kind of adjustments they make to old age. Because this is a youth-conscious country in which social attitudes toward old age are often negative and unfavourable, it is difficult for those who have grown up here to accept old age gracefully. Although the elderly are called “senior citizens,” they have none of the prestige associated with this status that elderly people have in countries where they are respected because of their wisdom and experience.