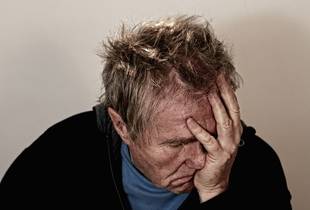 The second almost universal family-life hazard to good adjustment in old age is loneliness. Even when grown children live nearby, the elderly person’s contacts with them may be only occasional, and their companionship far less than was the case when the three-generation household was more usual than it is today.

One of the most common causes of loneliness in old age is loss of a spouse. While many elderly people acknowledge the possibility of the death of a spouse and make plans for it, relatively few realize the problems involved and are prepared to meet them or to adjust to the loneliness that it brings. Women, as a group, are generally better prepared psychologically for the death of a spouse than men. Heyman and Gianturco have explained the reason for this:

The elderly widow seems psychologically prepared to accept the death of the spouse through death rehearsal and lessening of social pressures, and she adjusts by maintaining a high rate of social activities. Religious convictions appear to be particularly important sources of strength.

The third major family-life hazard in old age involves living arrangements. These may be physically or psychologically hazardous or both. Physically, it may be hazardous for elderly people to remain in the homes they have occupied since the early years of marriage because these homes are likely to be too large for them to take care of without overtaxing their strength or straining their limited financial resources to provide domestic help.

Remaining in their old homes may be psychologically hazardous to good adjustment by being a constant reminder of happier times or by requiring such a large portion of income to maintain that cutting down must be done in other areas, such as clothes, travel, or participation in community activities.

If elderly people move to places that are better suited to their needs, the physical hazards may be reduced but the psychological hazards may increase. If, for example, their health or financial situations force them to live with a married child or in an institution, they may resist the change and thus adjust poorly to their new environment. Moving to an area where climatic conditions are more favourable may likewise reduce physical hazards but increase psychological ones if the move creates loneliness.

Another common psychological hazard that may occur when elderly people move, even if they stay in the same community, is not being able to keep all their cherished possessions. If they go to live in smaller homes of their own, or in the homes of married children or other relatives, or in institutions, they may have to give up much of the furniture, china, pictures, and other material possessions that served as status symbols for many years. They may also have to give up hobbies, such as gardening, if their new homes do not provide opportunities for such pursuits. This may leave them with a feeling of uselessness which will complicate the adjustments they must make to new living arrangements.

The fourth major family-life hazard in old age, and unquestionably one of the most serious, is the necessity for making role changes. As has been stressed repeatedly, role changes are always difficult and emotion-provoking. They become increasingly more difficult with each passing year. The more radical the change and the less prestige there is associated with the new role, the more the change will be resisted and the more disturbed the individual will be if forced by circumstances to make the change.

The man or woman who has been accustomed to playing the role of head of the household or of family breadwinner will find it difficult to live as a dependent in the home of a grown child. Similarly, the man who has achieved a position of prestige and responsibility in the vocational world will find it very difficult to become his wife’s “helper” when he retires, a role that implies lack of authority and masculinity. This militates against good adjustment not only to retirement but also to family life. In time it may have a profoundly unfavourable effect on the self-concept, thus leading to poor personal and social adjustments.