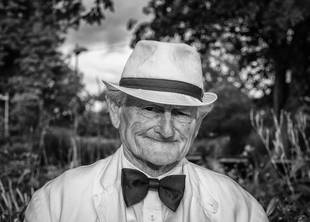 The fourth criterion that may be used to assess the kind of adjustment elderly people make is the degree of self-satisfaction or happiness they experience. According to Erikson, old age is characterized by either ego-integrity or despair. When the achievements of the elderly have come up to the standards they set for themselves earlier, so that the gap between their real selves and their ideal selves is small, they experience ego-integrity and are reasonably happy and satisfied with themselves and their achievements.

On the other hand, elderly people who feel that they have fallen short of their earlier expectations experience despair because they realize that with each passing day their chances for attaining their goals grow slimmer and slimmer. This is one cause for suicide among men in old age.

Even those who have been successful or reasonably successful may become dissatisfied in old age. As the sands of time run out, they too experience despair, though not to the same extent as those who believe themselves to be failures or near-failures. As Erikson has commented, “Despair is there for everyone, no matter how much he has accomplished.”

Causes of Happiness in Old Age

As is true of other times in the life span, happiness in old age depends upon fulfilment of the “three A’s of happiness” – acceptance, affection, and achievement. When any one of these is unfulfilled, it is difficult if not impossible for the elderly to be happy. When, for example, they feel that they are neglected by their grown children or other family members, when they feel that their past achievements have fallen far short of their hopes and expectations, or when they develop a “nobody loves me” complex, it is inevitable that they would be unhappy.

This means that unless the elderly have made reasonably good adjustments in the past and have been able to maintain a high degree of ego-integrity, they have far less chance for happiness now than they did earlier. However, it is important to recognize that people derive happiness from different things and from different experiences as they grow older. To the adolescent, for example, happiness means freedom from cares and responsibilities, popularity with members of both sexes, and engaging in enjoyable activities. To the elderly, happiness means something quite different. Barrett has described what makes elderly people happy in this way:

The older person who is financially secure, able to utilize his free time constructively, happy in his social contacts and able to contribute services to others will find the later longevous period of life truly rewarding. He will retain a superior self-concept, remain highly motivated, rarely become neurotic or psychotic and live out his life happily. He will not suffer from psychosocial deprivation, nor will he become senescent. When one is adequately prepared for retirement, these may truly be the “golden years.”

Variations in Happiness in Old Age

Because happiness does not have the same meaning for those who are old as it does for the younger, the elderly cannot expect to experience the same kind or the same degree of happiness as they did earlier. However, what people do is more important to their happiness in old age than what they are. In general, happy old people are more alert and ready to engage in new activities than are unhappy old people.

Middle- and upper-class people, on the whole, tend to be more active in community life than lower-class people. As a result, elderly people in the upper and middle classes tend to be happier in old age than those from the lower classes who, because of their social inactivity, feel lonely and useless.

Life satisfaction, as shown in the degree of happiness they experience, tends to be greater for women than for men up to age sixty-five. After that, the reverse is true. This may be due, in part, to the freedom from responsibilities men experience when they retire while women’s responsibilities continue or even increase when their husbands are at home most of the time, and, in part, to the fact that physical characteristics of aging, as was pointed out earlier, are less socially approved in women than in men.

Regardless of social class, sex, or any other variable, certain conditions can be counted on to contribute to happiness in old age. The most important of these are given in below.

Some Important Conditions Contributing to Happiness in Old Age

Persons with an active, achieving, and outward-directed life style will be best satisfied with a continuation of this style into old age with only slight diminution. Other persons with a passive, dependent, home-centered life style will be best satisfied with disengagement . . . Undoubtedly there is a disengaging force operating on and within people as they pass 70 and 80. But they will still retain the personality-life style characteristics of their middle years.