How Do Our Eyes Create Tears 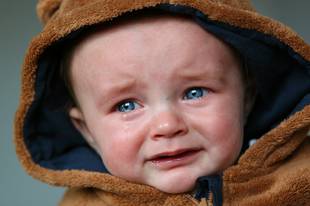 It would be more accurate to say that our bodies create tears for our eyes. The human eye itself is protected from outside irritants by a tear film, which is actually three layers thick. The outermost lipid layer is oily, which helps keep tears to remain in the eye. The middle aqueous layer is watery, but also contains chemicals which wash away germs and other irritants. The innermost layer of the tear film is called the mucous layer, which provides a smooth protective coating over the surface of the eye.

The human body produces tears by stimulating two glands situated above each eye, behind the upper eyelids. These lachrymal glands are responsible for excreting lachrymal fluid, the medical term for tears. Lachrymal fluid is very salty, although there is some evidence that the brain senses a need for tears, the lachrymal glands excrete the lachrymal fluid into the upper eyelid area. Gravity or capillary action draws this fluid onto the eye's surface, where it either lubricates the eyeball, washes away the irritant or simply pools at the base of the lower eyelid.

The production of tears is essentially semi-automatic. The lachrymal glands routinely produce a small amount of tears in order to keep the eyes lubricated and free of irritants. If a specific irritation such as the gas from a raw onion or cigarette smoke reaches the eyes, then the brain send out a signal for the lachrymal glands to produce more tears.

A person can also generate tears through the use of strong emotions. Trained actors often have the ability to generate real tears in a dramatic scene by using sense memory to trigger a genuine emotional response. Hard squinting can also force lachrymal fluid to pool up, creating the illusion of real tears.