Social Change And Aspects Of Globalization 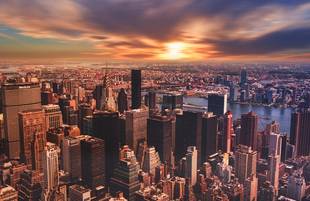 The Nature of Globalization

Alex MacGillivray (2006), in his book, “A Brief History of Globalization,” states: “The planet we live in is now an incredible shrinking planet.” This, of course, is a metaphor, a figurative language to dramatize the fact that time and geographical distance between countries and among people are no longer barriers that separate men and nations. Scientific advances in technology, more specifically, the invention of amazing machines and incredible computers have made it possible for humans to conquer time and space. The fast pace of transportation and communication has, indeed, transformed the earth into an incredible shrinking planet!

Today, contemporary society is now on the threshold of a new phase in human history: the second Industrial Revolution – the Computer-Induced Revolution; the Electronic Age, the Electronic Revolution, Technological Convergence. Various metaphors have been applied in this new Industrial Revolution, including Alvin Toffler’s “Third Wave” (1980), John Naisbet’s “Megatrends” (1982), and Theodore Levitt’s “Era of Globalization” as used in an economic context. The economic trend at present is shifting from a national to a global economy.

Globalization refers to the process of increasing integration between units around the world, including nation-states, households/individuals, corporations and other organizations. It is an umbrella term, covering economic, trade, social, technological, cultural and political aspects, and is the opposite of deglobalization (Levitt, Theodore, “Globalization of Markets,” 1983).

A broad overview definition is that globalization is the worldwide process of homogenizing prices, products, wages, rates of interests and profits. It relies on three forces for development: the role of human migration, international trade, and rapid movements of capital and integration of financial markets. (Shariff, Ismael, “Global Economic Integration,” 2003).

The International Monetary Fund (IMF) stresses the growing economic interdependence of countries worldwide through increasing volume and variety of cross-border transactions, free international capital flows, and more rapid and widespread diffusion of technology. Modern-day globalization takes the initial phase of a borderless economy, free trade, import and export liberalization, the lifting of protective tariffs, and trade without boundaries as espoused by the World Trade Organization (WTO) and its initial global political organization – the GATT or General Agreement on Trade and Tariffs. Globalization from this economic paradigm favors the reach and power of multinational and transnational giant corporations. The change in the policy environment is a “liberalization revolution,”  a freeing up or opening of markets and reduction in the role of government in terms of ownership and control over production of goods and services. The umbrella concept of liberalization includes removal of all barriers to trade, foreign investment and exchange controls; freeing of product and factor markets; rules-based systems of regulation; policy regimes favouring financial stability. A less economic-focuses definition from the Encyclopedia Britannica states that globalization is the “process by which the experience of everyday life… is becoming standardized around the world. This could be in the form of political, informational, or cultural globalization.

The Global Scenario Group, an environmental research and forecasting organization, views globalization as part of the shift to a Planetary Phase of Civilization, characterized by global social organization, economies, and communications. The GSG maintains that the future character of this global society is uncertain and contested (Florine, A. 2000. The Third Force). However, critics maintain that the present trends of globalization lean towards American hegemony.

Reniichi Ohmae’s phrase, “the borderless world,” captures the sense of radical progress and modernity, and of life beyond the constraints of the traditional nation-state, which infuses much of the popular writing about globalization (Ohmae, 1990. The Borderless World, Collins, New York). Many relish the excitement and the widening of opportunities and want to remove barriers to markets and mobility.

The economist’s perspective takes as a reference point the idea of globalization as a model of fully internationally integrated markets, defined by David Henderson (1999. The May Affair. London) as those meeting two conditions:

The ultimate consequence of such a world would be the equalization of prices – and returns to capital and labor – the ‘law of one price’ – subject to differences in quality and transport.

Another way of characterizing globalization is though a mixture of legal and organization categories. Richard O’Brien, in his End of Geography (1992) London), has helpfully made the following distinctions:

Globalization essentially refers to a mixture of international, multinational, offshore and global activities and involves a general progression from the domestic to the global (Dr. Vincent Cable, 1999, Chatman House, London).

Globalization has various aspects which affect the world in a variety of ways:

The most important forms of social behaviour necessary for successful ...

Nature And Social Structure Of Economy

Nature and Definition of the Economy From the first appearance ...