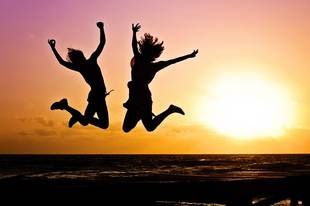 At every period in the life span, happiness is influenced by a number of factors. This is in part responsible for the variation in happiness at different ages and also for the fact, discussed above, that happiness at one age does not necessarily guarantee happiness at other ages. The most common and important of the factors are given and briefly explained below:

Good health enables people at all ages to do what they want to do, while poor health or a physical disability is an obstacle to the satisfaction of their wants and needs and, as such, affects their happiness unfavourably.

Physical attractiveness contributes to social acceptance and affection and often leads to greater achievements than would be possible if the individual were less attractive.

The greater the autonomy people can achieve, the greater their chances for happiness. This is as true of early childhood as it is of the adult years.

Interactional Opportunities Outside the Family

Because of the high social value placed on popularity, people at all ages are happier if they have opportunities for social contacts with outsiders than if their social contacts are limited to family members.

The more routine the work and the fewer opportunities for autonomy in it, the less satisfying it will be. This is just as true of chores assigned to children as work in the adult years.

When the pattern of living enables the person to have interactions with others, either in the family or with friends and neighbors in the community, it adds greatly to life satisfactions.

It is not material possessions, per se, that influence happiness but the way people feel about them.

Balance between Expectations and Achievements

If expectations are realistic the person will be satisfied and happy when the goal has been reached.

Well-adjusted, happy people express negative emotions, such as fear, anger, and jealousy, less often and with less intensity – and with more focus and direction – than do those who are poorly adjusted and unhappy.

Attitude toward an Age Period

How happy people will be at a particular age will be determined partly by their own childhood experiences with other people at that age and partly by cultural stereotypes.

People who believe their abilities to be greater than they actually are unhappy when they fail to reach their goals. Their unhappiness is intensified by feelings of inadequacy and by the belief that they are misunderstood and mistreated.

People tend to romanticize a role they will play at a later age. If the new role does not live up to their expectations, they will be unhappy unless they are willing to accept the realities of the new role. As a group, children and adolescents tend to have more unrealistic role concepts than adults. This contributes to unhappiness at these age levels.

The relative importance of these factors depends on the individual and the individual’s age. Meltzer and Ludwig reported that happiness at different periods in the adult years was remembered as being due to family, marriage, good health, and achievements, while unhappiness was associated with illness, physical injuries, death of a loved one, unsuccessful work experiences, and failure to reach golas.

Sears has reported that among men of very high intelligence there is a tendency to regard life satisfactions as coming more from happy family life than from successful achievement in occupations. This conclusion was drawn at an average age of sixty-two, as the men looked back and tried to assess what contributed to their satisfaction at different ages in the adult years. The relative importance of factors contributing to life satisfaction – occupation, family life, friendship, richness of cultural life, total service to society and joy in living.

By contrast, for children and adolescents who place high value on popularity and acceptance by peers, such factors as money and status symbols, good health and good looks, and opportunities to play the roles they enjoy add to their life satisfactions more than family life or other factors that contribute to happiness during the adult years.

Importance of Happiness and Unhappiness

The significant fact about the unhappiness that occurs during the life span is that it affects people’s attitudes and, in turn, leaves its mark on their personalities. Whether they be schoolchildren, factory workers, housewives, or business executives, their chances of developing their potentials are greatly reduced by their unhappy mental states.

Linn, for example, has reported that older people who remember their childhood as unhappy are dissatisfied and unhappy as adults. Their unhappiness and dissatisfaction not only continue as they grow older but tend to increase rather than decrease. It has also been reported that those who, as children, were afraid of being laughed at or punished or of not being attractive and popular ended not only to have unhappy memories of childhood but, even more serious, to suffer from self-derogation as adults.

One of the most serious facts about unhappiness is that it may and often does become a habit. And, like all habits, the longer it exists, the more deeply rooted and resistant to change it becomes. That is why, as was pointed out above, people who were unhappy than happy during their adult years.

Because unhappiness can play such havoc with personal and social adjustments throughout life, an attempt will be made throughout the remainder of this book to discuss the causes of unhappiness at each age level and to suggest what might be done to prevent or to minimize it. In addition, emphasis will be placed on the factors that contribute to happiness at each developmental age and on how they might be strengthened to counteract any unhappiness that is inevitable.

From studies made to date, there is ample evidence that satisfaction and happiness during the remaining years of a person’s life. This, however, is possible only if the three ingredients of happiness are present. If children learn how to behave in such a way as to encourage others to accept them as friends not only then but as they grow older; if they learn to show affection for others and to expect affection from others with no thought of reciprocation; and if they have realistic concepts of their abilities so that their achievements will come up to their expectations, they can anticipate satisfaction and happiness for the remainder of their lives.

We know that kids have a tendency to say some ...

The best single criterion derived from work is satisfaction. There ...