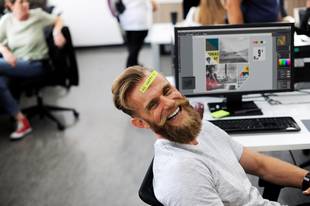 The best single criterion derived from work is satisfaction. There are age cycles in vocational satisfaction for both men and women. In their early twenties, most individuals are glad to have a job, even if it is not entirely to their liking, because it gives them the independence they want and makes marriage possible. With the confidence of youth, they believe it will be just a matter of time until they are promoted to a better job or find one that is more to their liking.

Dissatisfaction usually begins to set in during the mid- to late twenties when young adults have not risen as rapidly as they had hoped to. If family responsibilities make it impossible for them to change jobs, or if it is a time of economic depression when jobs are scarce, their dissatisfaction increases. This period of unrest and dissatisfaction lasts generally until the early or mid-thirties, after which there is usually an increase in satisfaction resulting from greater achievement and better financial rewards. It has been found that most individuals in their thirties like their work, but they do not “love” it. They enjoy the social contacts work gives them, the feeling of being a part of the world of action, the satisfaction they derive from achievement, and, most important of all, the money they can use to live as they want to live.

Women, as a group, tend to be far less satisfied with their jobs than men. This is not only because they are usually forced to take jobs below their abilities and training but also because their working often means carrying a work overload and dissatisfaction on the part of the family members because they must do this. Relationships with their husbands are often strained when women work outside the home and this increases their vocational dissatisfaction.

Men and women who can choose jobs in areas in which they are interested and can use their abilities and training are usually better satisfied than those who must take what is available.

Adults who expect their work to give them the autonomy they did not have when they were younger, and to rise rapidly on the vocational ladder, will become discouraged and dissatisfied with their jobs if these expectations are not met.

The more stimulating the work involved in a job, the greater satisfaction the worker derives from it. Nonstimulating, routine work leads to boredom and this, in turn, leads to job dissatisfaction.

Career-oriented workers are willing to work up to their capacities, to try to improve their skills and to make personal sacrifices in terms of time and effort in the hope of achieving success.

A reasonable amount of job security will contribute to the satisfaction of all workers while uncertainty – if they fear they may be put out of work because of automation or that they may be fired – makes them feel that they are “sitting on the top of a volcano.”

Adults with college degrees are usually better satisfied with their jobs than those who have only high school diplomas. The least satisfied are, for the most part, the dropout from high school or college because they find themselves in dead-end jobs or jobs with little security.

Workers who see a possibility of advancement will be far more satisfied with their jobs than those who suspect or know that they are in “dead-end” jobs.

Unfavorable stereotypes about jobs, such as the service jobs or those considered unappropriate for members of the worker’s sex, make workers dissatisfied with their jobs when they realize they are regarded unfavourably by the social group.

Too much responsibility, a too-heavy work load, feeling unqualified for the job, or necessity for making decisions affecting the lives of others tend to lead to stress on the part of workers and this weakens their satisfaction with their work.

A reasonable amount of autonomy, the chances for congenial associations with coworkers, lack of discrimination, fair treatment and consideration from superiors, and liberal fringe benefits add to the worker’s job dissatisfaction.

The satisfaction of workers is increased when they know that family members are proud of their jobs and satisfied with the salary they receive and when friends and members of the social group regard their jobs favourably.

Workers who are satisfied with their jobs become dedicated to their work and loyal to their organization. As a result, they play an important role in keeping worker morale at a high level. From the personal point of view, job satisfaction contributes to the worker’s self-satisfaction and this, in turn, contribute to the worker’s happiness.