Tips To Become Unforgettable In Bed 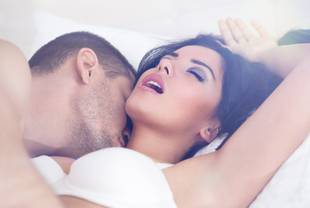 Some men go to the weirdest extent trying to become the illusive superlover than they endlessly pump iron in the gym, down all sorts of aphrodisiacs and energy boosters, or worse, dangerously stitch tiny balls on their things!

Between "legitimate" lovers, intimacy is the foremost factor leading to a well-defined sexual encounter. Couples need to be totally in love, intimate, and uninhibited with each other, to reach the peak of sexual pleasure. They must know their partner's needs and desires, and how these can be complimented and fulfilled.

For example, while it is perfectly normal for men and women to fantasize during sex, this becomes a problem when one feels guilty about secret desires and sexual kinks. The guilt, express agree, inhibit sexual happiness and satisfaction. What is really important is each other's attittude towards his or her fantasies.

Couples should realized that the sharing of an erotic (or even a taboo) fantasy is a show of trust and intimacy for the other and to treat it shabbily could result to holding other secrets and keeping deep emotions to themselves for fear of rejection again. This will definitely hinder the attainment of good sex. Remember that if you cannot tell each other what you really like in bed, then you cannot really be close. If you feel shy or awkward about something, then do tell your spouse without condemning his desire. Understanding is another key factor. Do not just say "no" without the benefit of trying. Talk it out, for all its worth, it's just a fantasy. Intimacy is sharing each other's thought and emotions, whether they be kinky or not.

Fantasizing is a part of everybody's mind. Virtually everyone fantasizes about sex, whether they are male or female, young or older, married or single. In fact according on a Psychology Bulletin report made by Doctors of Psychology Harold Leitenberg and Kris Henning, only five percent of both men and women have never had a sexual fantasy (or won't admit it). So, we should not judge our sexual partner when he or she seeks to play a particular fantasy and make the other a guinea pig and altogether turn the bedroom into a jungle or a pornographic studio.

Some couples find it particularly exciting to act out their fantasies together, a process known as role-playing. When you role-play, you are acting out a sexual scenario that can be as simple or elaborate as you choose. You may want to pretend, for instance, that one or both of you is a celebrity, or even a fictional character. Many sex therapists agree and would even endorse sexual role-playing among husbands and wives to enhance their getting-to-be-boring marriage lives. So if the wife is willing to play the role of Lindsay Lohan or Jessica Alba, the husband should also take the cue in playing the role of whosoever person her wife wants to fantasize about.

Experts add that fantasizing does not necessarily mean that one or the other is "sick" or a "pervert." Once a partner react with disapproval when his or her spouse's verbalize a fantasy, then he or she end up feeling humiliated. And this is not good in a married life.

University of Washington sociologist Pepper Schwartz, who studies sexuality and sexual fantasies said unwanted sexual fantasies typically involve behaviors our culture tells us are inappropriate, such as adultery, incest, and rape. Forbidden thoughts have an intuitive quality to them: It's the things we're not supposed to think about that often seem most alluring. Sexual fantasy, however, is a natural part of being human.

Men and women who harbor forbidden fantasies are often misunderstood and labeled as immoral. So, they often try to suppress these fantasies. It's a practice that dates back to the dark era of the Inquisition. Modern-day moralists cannot, however, defy the findings of many psychological studies revealing that suppression can be very bad.

Researchers see a snowball effect with regards to suppressing "forbidden" thoughts. We tend to suppress most energetically thoughts that bring us the most pain or what we deem immoral, said University of Virginia psychologist Daniel Wegner, and yet, the harder we suppress, the more intrusive and unpleasant the thought becomes.

Suppressing forbidden thoughts is more dangerous. When it is suppressed to the point of prejudice, it internalized and becomes even stronger in the subconscious where the person has lesser control. Not unexpectedly, many researchers and therapists suggest that the way to loosen the grip of forbidden or unwanted thoughts begins with the de-suppression of them. Studies revealed that married people confessing so-called forbidden fantasies with their spouses and acting it out literally have far better results than suppression. Acting it out in a controlled environment with a consenting (and understanding) partner is a form of release that can be both beneficial and mentally healthy.

Our favorite internally triggered fantasies probably attain preferred status through classical conditioning. Fantasies that accompany orgasms are particularly reinforced, for instance, making them more arousing next time around. From there "we embellish them, change them," said Ethel Person, a Columbia University psychiatrist and author of By Force of Fantasy. "They're like an evolving series. Scenarios that don't accompany arousal are discarded."

In fulfilling a sexual fantasy, both partners must be willing and fully consenting for it to have a good result. Inhibitions should be set aside just for the part to be played. It should, however, be cleared to both partners that this is just a role-playing game to enhance sexual pleasure in their relationship. It shouldn't go beyond the bedroom, so to speak.

Note: While other more liberal people are willing to try fulfilling fantasies outside their realm of control (e.g. going for a threesome or having an affair), the outcome could get complicated. Taking it too far away from physical moral boundaries could ruin the relationship rather than enhance it. Thinking doing a "thing" once won't hurt is a fallacy, especially if one is deep into the relationship. There will always be a drawback that will haunt both partners for the rest of their lives. Then again, as long as both partners have a clear conscience in the act and the decision to go for it is mutual and without hesitation, no psychologist will argue with them.

Mental As Well As Physical

Sex is as much a matter of the mind as it is of the genitals. Again, intimacy and sharing each other's thoughts helps build both mental and phyical confidence in the performance of sex.

A couple can always do a "quickie" sex just to release pent-up tensions in their groins, but for a really passionate and satisying sex, both should prepare for it mentally. Leave the office problems and houseworks outside the bedroom. Mental disturbance can absolutely hinder sexual performance. So, clear your mind.

You can do this by proper scheduling. Yes, scheduling your sexual encounters can do wonders. Make it a point to set a specific day (once a week or twice a month). As long as you are both mentally and physically "clean" for that particular day, then the stage is set.

Start slow by just watching television and eating snacks together. Cuddle, tickle, pet each other, whatever is mutually stimulating for both of you. Talk about little things of fancy, exchange pleasant thoughts, and make each other smile. Things will progress, and before you know it you are turning off the television and heading for the bed.

Playing good sensual music can also stimulate erotism in your mind. So, if you can, try to play one.

Be Slow and Gentle

Controlling one's emotion and sexual excitement may be difficult at the onset, but with practice and good communication between partners, this can be attained with absolutely great result.

As was mentioned earlier, don't go directly to the bed; talk and exchange some fancy or even naughty thoughts. Make yourself comfortable with each other's words, smells and touches.

Foreplay is very important in a good sex. Many sex experts agree that majority of women can attain orgasms with just foreplay. Again, it must be emphasized that good communication is necessary. Tell each other what is pleasurable and what is not. There will always be common grounds; explore them to the fullest.

If both of you like long, lingering kisses, then linger on. If petting and oral sex turn you on, go and explore each other's tickle spots. Don't rush to the intercourse; spend a little more time on foreplay.

As couples explore each other's body, they will eventually learn how to give mutual pleasure. Men will discover their women's g-spot, and women will know how to make their men last longer in sex.

Gentleness is sometimes forgotten at the height of sexual urges. The belief that most men and women like it rough is a fallacy. Many research and studies indicate that majority of men and women generally want gentle, passionate sex. It is often emphasized, except for some deviant couples, that tender caresses give more pleasurable than rough sex.

TagsRelationshipSociallovemarriagesextips to become unforgettable in bed

How To Sizzle In Sexiness This Holiday

Tis the season to be jolly. Falalala lala lala. This ...

Signs That You And Your Partner Are Total Power Couple

Have you seen picture of Angelina Jollie and Brad Pit ...