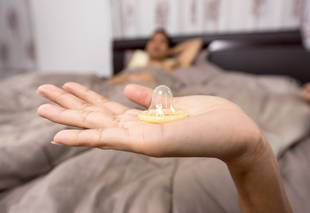 The barrier methods of contraception put a physical barrier between sperm and egg, so that the two cannot meet.

i. Male condom or prophylactic latex

The condom is a synthetic latex sheath worn over the penis during copulation to prevent the sperm from entering the woman’s womb. It has a sealed end that catches the sperm-containing fluid at ejaculation. It is unrolled over the man’s erect (enlarged and rigid) penis before intercourse and unrolled and disposed of afterwards. It is advised to withdraw the penis immediately after intercourse, and while still erect. Delaying may cause sperm to spill out into the cervix.

Condoms are now coated with spermicidal chemicals that kill or disable the sperm. They are also helpful in preventing the spread of STD including AIDS. Experts say its effectiveness is more or less 75% to 80% in preventing pregnancy.

Female condom is elongated as polyurethane sheath about 6.5 inches long, with a flexible ring at each end. It is used to line the inside of the vagina and covers the cervix. It prevents the sperm from reaching the cervix. It is inserted into the vagina before intercourse. Its effectiveness is more or less 75% to 80% in preventing pregnancy.

This device is a thin rubber cap or bowl-shaped rubber disk with flexible rim that fits into the top of the vagina and covers the cervix, the neck or entrance to womb. It prevents the sperm in the vagina from entering the uterus and reaching the egg beyond. It is usually fitted 2 to 3 hours before intercourse and removed several hours afterwards. Both sides of the disk are smeared with spermicidal gel or cream then placed deep into the vagina to cover the cervix. Its effectiveness is more or less 82% in preventing pregnancy.

The sponge is a soft, donut-shaped device, which is made of spongy material that contains spermicide. It must be moistened and inserted before intercourse, and left in place from up to six hours afterward (although it can be worn for up to 24 hours with repeated intercourse). It works like the diaphragm and the cervical cap. Its function is the block the entry of the sperm into the womb. The sponge is available without a prescription and is about 85% effective on preventing pregnancy.

Intra-uterine contraceptive devices are made of small flexible plastic of metal a few centimeters long that is placed inside the uterus (womb). It is fitted by a doctor, and stays in place from 6 to 8 years upon insertion, and only annual medical check ups are needed.

There are many designs and shapes available, such as spirals, T’s, Ts, rings, loops and coils. The coil is another name for a IUD, even if it is not coil-shaped.

The IUD does not usually prevent sperm reaching the egg and fertilizing it. This is because fertilization generally happens when sperms have passed through the vagina, cervix, womb, and into the oviduct (Fallopian Tube), where the egg is waiting. The IUD’s shape, presence and chemicals disrupt the balance in the womb. This prevents the fertilized egg form settling, or implanting, in the lining of the womb and developing further. It is also believed that the device hastens the fast downward flow of the fertilized egg cell preventing it from attaching itself on the uterine wall.

Many IUDs have threads or “tails” that stick through the cervix. These can be felt to make sure the device is still in place. Its effectiveness is 97% to 99% of preventing pregnancy.

With more and more products steeling their claims with the ...

What is consciousness? To be conscious is to be alert ...

Reproduction is the basic biological reason for sexual intercourse. However, ...