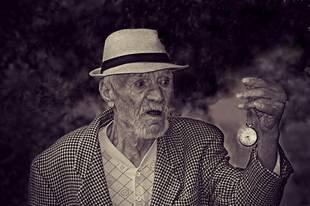 The major personal and social hazards of middle age stem from the tendency of many men and women to accept the cultural stereotype of the middle-aged person as fat, forty, and balding. Because of a lack of scientific information about middle age, cultural stereotypes and many traditional beliefs have persisted. They can have serious effects on the attitudes of middle-aged persons and members of the social group toward them.

However, while serious to good personal and social adjustments is acceptance of cultural stereotypes and traditional beliefs, they are by no means the only hazards. Some of the important personal and social hazards that make adjustment especially difficult for middle-aged people in the American culture of today are discussed below.

There are a number of personal hazards middle-aged people encounter in their adjustments to their new roles and new lifestyles. Of these, six are especially common and serious.

Acceptance of traditional beliefs about middle age has a profound influence on attitudes toward the physical changes that come with advancing age. The menopause, for example, is often referred to as a “critical” period, and this can heighten a women’s dread of it. As Parker has said:

This term carries the implication of danger – that woman is on the brink of disaster, that her health, her happiness, and her very life is in jeopardy. It further implies that this is not merely a time of crisis that can be met forthwith and dissolved, but rather years when she must feel her way along a narrow ledge of safety, at any moment of which by one false step she might fall into the abyss of a mental breakdown or serious physical illness.

Because hair on the head, face, body, arms, and legs is traditionally associated with virility in men, the thinning of the hair in middle age is likely to be a source of great concern to them. Even the beginning of baldness disturbs them because they believe that it is indicative of a decline in their sexual powers. In reality, anxiety about virility is one of the chief causes of such decline, and the balding middle-aged man who worries about his sexual powers merely accelerates the rate of their decline.

Many middle-aged people, particularly men, are in constant rebellion against the restrictions age places on their usual patterns of behaviour. A man may refuse to adhere to a diet his doctor prescribes or to restrict his activities for the sake of his health. Like the pubescent child, the middle-aged man rebels against restrictions on behaviour, but for a different reason. Rebellion stems from a recognition of the value that society attaches to youth and thus he is rebelling against restrictions that mean he is growing old. This may bring on middle-aged ailments of minor or major seriousness. As Steincrohn has pointed out:

Women who make the poorest adjustments to middle age are those who have attached a great deal of importance to a youthful appearance and masculine admiration. When they are forced to recognize that they are no longer as attractive as they once were and that they cannot attract and hold masculine attention, they may openly rebel against middle age.

When adjustment to middle age is poor, as shown by constant rebellion against the physical changes that inevitably come with aging, interest in clothing is intensified. Men and women concentrate mainly on selecting clothes which will make them look younger than they are. Bright colors, extreme styles, and a large wardrobe become as important to the middle-aged man or women who is trying to defy age as they are to the adolescent.

Rebellion against middle age is often heightened by magazine articles, television advertisements, and so on, that stress what the middle-aged person can and should do to camouflage the telltale signs of aging. Ryan, however, has suggested that these changes in appearance are not necessarily unattractive.

Some of these changes may make the individual more, rather than less, attractive. Often the first and most obvious change is in the color of the hair which usually turns to gray and then to white. This frequently is a positive factor: many people are more attractive with white hair. Also, as individuals grow older, the face becomes more lined and wrinkled. This, again, is not necessarily a detriment. These lines may give a pleasing character to a face which was bland and uninteresting with the smoothness of youth.

Changing roles is never easy, especially after one has played certain prescribed roles over a period of time and has learned to derive satisfaction from them. Furthermore, too much success in one role is likely to lead to rigidity and may make adjustment to another role difficult.

Also, a person who has played a narrow range of roles is likely to be less flexible than one who has played a wider range and has learned to derive satisfaction from different roles. The person who has played many roles find it easier to shift to a new one. To make a good adjustment to new roles, the individual must, as Havighurst has explained, “withdraw emotional capital from one role and invest it in another one”.

A serious hazard to good personal adjustments in middle age comes from the necessity for changing interests as physical strength and endurance decrease and as health deteriorates. Unless middle-aged men and women can develop new interests to replace those they must give up, or unless they have developed enough interests in their earlier years to be able to abandon some of them without feeling their loss too seriously, they are likely to become bored and wonder how they can spend their leisure time.

Like adolescents who become bored when they have too few interests and activities to fill their time, middle-aged people, both men and women, are likely to try to “stir up some excitement.” Usually they do this by seeking out extramarital relationships. While these may be temporarily satisfying, they are likely to lead to feelings of guilt and shame, to anxiety about being “caught,” and to serious problems with the spouse and other family members if they are discovered. This will be discussed in more detail in the following articles.

Women’s increased interest in status symbols, discussed earlier in this chapter, which is a common characteristic, can be a hazard to good personal and social adjustments if families cannot afford the status symbols they want. In such cases, there are three common reactions on the part of women who crave these symbols. First, they may complain and nag their husbands for not providing the money for these symbols; second, they may overspend and plunge the family into debt; or, third, they may go to work to earn the money themselves. All of these patterns of response to the craving for status symbols tend to lead to frictional relationships with spouses, especially the third pattern, which many men feel reflects unfavourably on their ability to provide for their families.

Middle-aged people who have unrealistic aspirations concerning their achievements – often carried over from adolescence – face a serious hazard to good personal adjustments when they realize that they have fallen short of their goals and that time is fast funning out.

While this hazard is more likely to have a direct effect on men than on women, women are indirectly affected when their husbands fail to achieve the financial and vocational success they had expected. Even though women who work tend to have more realistic aspirations than men, they may also realize that they have not reached their goals and that time is running short.

Failure to reach any goal can lead to feelings of inferiority and inadequacy, feelings that tend to become generalized and result in a failure complex. People who develop such complexes have a defeatist attitude toward everything they undertake. As a result, their achievements fall even further below their aspirations.

Recreation One of the major developmental tasks of middle age ...

Assessment of Social Adjustments in Middle Age Social adjustments at ...