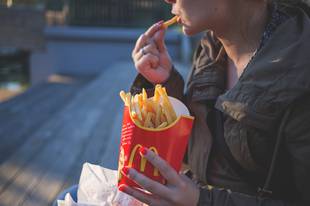 FEEDING AND EATING DISORDERS OF INFANCY OR EARLY CHILDHOOD

1. Pica. The essential diagnostic feature of this disorder is the persistent eating of nonnutritive substances for a period of at least one month. Infants and younger children may eat animal droppings, sand, insect, leaves or pebbles. Adolescents and adults may consume clay or soil. There is no a version to food. This behavior is developmentally inappropriate and not part of a culturally sanctioned practice.

2. Rumination Disorder. This essentially features repeated regurgitation and rechewing of food that develops in an infant or child after a period of normal functioning and lasts for at least one month. Partially digested food is brought up into the mouth without apparent nausea, retching disgust or association gastrointestinal disorder. The food is then either ejected from the mouth or, more frequently, chewed and re swallowed.

3. Feeding Disorder of Infancy or Early Childhood. The essential diagnostic feature of this disorder is the persistent failure to eat adequately, as reflected in significant failure to gain weight or significant weight loss at least one month. Infants are often especially irritable and difficult to console during feeding.

What is a tic? A tic is a sudden, rapid, recurrent non rhythmic, stereotyped motor movement or vocalization. It is experienced as irresistible but can be supposed for varying lengths of time. All forms of tic may be exacerbated by stress and attenuated during absorbing activities like reading for sewing. Tics are usually markedly diminished during sleep. There are 4 disorders included here:

1. Tourette's Disorder. These are multiple motot tics and one or more vocal tics. These may appear simultaneously or at different periods during the illness. The tics occur many times a day, recurrently throughout a period of more than 1 year. During this period, there is never a tic-free period or more than 3 consecutive months. The disturbance causes marked distress or significant impairment in social, occupational, or other important areas of functioning. The onset of the disorder is before 18 years.

2. Chronic Motor or Vocal Tic Disorder. The essential feature is the presence of either motor tics or vocal tics but not both. This differs from Tourette's Disorder in which there must be both multiple moto and one or more vocal tics.

3. Transient Tic Disorder. The essential feature is the presence of single or multiple motor tics and/ or vocal tics. The Tics occur many times a day. Nearly everyday for at least 4 weeks, but no longer that 12 consecutive months.

4. Tic Disorder Not Otherwise Specified. This category is for disorders characterized by tics that do not meet criteria for a specific Tic Disorder. Examples include tics lasting less than 4 weeks or tics with an onset after age 18 years.

1. Encropresis. This is repeated passage feces into appropriate places, that is clothing or floor. Most often this is involuntary but occasionally maybe intentional. The event must occur at least once a month for at least 3 months and the chronological age of the child must be at least 4 years, or children with development delays, a mental age of at least 4 years.

2. Enuresis. (Not Due to a General Medical Condition). The essential feature is repeated voiding of urine during the day or at night into bed or clothes. Most often this involuntary but occasionally maybe intentional. To qualify for a diagnosis of Enurisis, the voiding of urine must occur at least twice per week for at least three months.

OTHER DISORDERS OF INFANCY, CHILDHOOD, OR ADOLESCENCE

1. Separation Anxiety Disorder. The essential diagnostic feature of this disorder is excessive anxiety concerning separation from the home or from those to whom the person is attached. This anxiety is beyond that which is expected for the individual's developmental level. The disturbance must last for a period of at least 4 weeks, begin before age 18, and cause clinically significant distress or impairment in social academic, occupational or other important areas of functioning. Children with this disorder tend to come from families that are close knit. When separated from home or major attachment figures, they may recurrently exhibit social withdrawal, apathy, sadness or difficulty concentrating on work or play. Children may complain that no one loves them or cares about them. Depending on their age, individuals may have fears of animals, monsters, the dark, muggers, burglars, kidnappers, car accident, plane travel and other situations that are perceived as presenting danger to the integrity of the family or themselves. Concerns about death and dying are common. Children may complain that no one loves them or cares about them and that they wish they were dead.

3. Reactive Attachment Disorder of Infancy or Early Childhood. The essential diagnostic feature is markedly disturbed and developmentally inappropriate social relatedness in most contexts that begins before age 5 years and is associated with grossly pathological care.

5. Disorder of Infancy, Childhood, or Adolescence Not Otherwise Specified. This category is a residual category for disorders with onset in infancy, childhood, or adolescence that do not meet for specific disorder in the classification.

Sleeping Disorders And Other Behavioral Disorders

SLEEP DISORDERS What are sleep disorders? This is an umbrella ...