Salt And Sugar: For Food Preservation 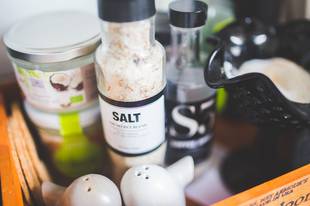 If a red blood cell is placed in pure water, it will swell and eventually explode. This is due to a process called osmosis, which is also critical to the internal operation of many organisms. The red blood cell has a makeup that causes it to absorb water.

Food is spoilt when certain microorganisms begin to reproduce on and digest its surface, releasing harmful toxins as byproducts of their metabolic processes. Sometimes the microorganisms themselves - mostly bacteria and fungus - present a risk to humans, as ingesting them is an invitation to reproduce within the host's body. Therefore, to preserve food, one must ensure that it is difficult or impossible for microorganisms to reproduce or survive in it.

High-salt and high-sugar mixtures preserve food because they are absorbent relative to the internal fluid of microorganisms, causing them to shrivel up and eventually die. When a layer of a high-salt or high-sugar substance is used to preserve food, the food is protected from microbial invasions. This is a more sophisticated way to preserve food than the oldest method - simply letting it dry out.

Like any other popular recipe that you could try to ...

Spaghetti is a a delicious and popular food that you ...

Back when I was kid, during holiday season my family ...